What can I say ... Everything is expected. After the Forbes investigation: Binance makes money on US investors by deceiving regulators (Operation Tai Chi) - the criminal Binance casino decided to demand the removal of the investigation from Forbes in court and publicly flex its muscles, because it is impossible to leave such a reputational blow, Forbes is read not only by ordinary users, but also politicians, US law enforcement and supervisors, from which Binance tries to get away as far as possible.

First, Binance decides to exponentially block US users (which no one has done before and everyone did not care where a person came from, where he got money from, where he got a crypt from). Of course, we do not forget about the best underground traditions of conducting criminal business, and this is how the Binance exchange hides the legal structure from regulators and users, the inarticulate hum of the headquarters of Changpeng Zhao, who could not or did not want to disclose the location of the Binance headquarters (only you can hopes that the headquarters is not in some Kiev), and support and any official requests are generally ignored: Binance does not answer questions about the legal and physical location.

On November 18, 2020, the cryptocurrency casino Binance files a lawsuit against the publishing house Forbes Media and its journalists - Michael del Castillo and Jason Brett. The reason was the publication about serving American clients of the platform bypassing US regulators and regulators of other countries (recall that Binance is not regulated in any country in the world). The lawsuit was filed in the US District Court in New Jersey. According to the organizers of the Binance criminal community, the article contains allegedly "numerous false, misleading and defamatory statements."

BINANCE HOLDINGS LIMITED insists that it did not create the document described by journalists called "Operation Tai Chi" and its alleged author Harry Zhou has never worked at Binance. Forbes magazine did not respond to the request to remove the post and to apologize. BINANCE HOLDINGS LIMITED expects to recover compensation from the defendant, the amount of which will be established in court: 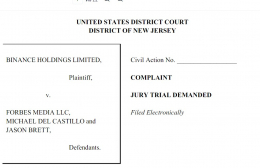 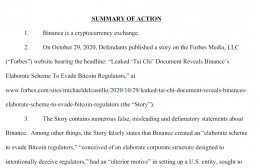 Directly the claim from Binance to Forbes and all the requirements are available at the link, you can study. We would note that the claim underlines one important detail - the Binance.com casino is operated and controlled by the offshore company BINANCE HOLDINGS LIMITED (from which the claim came and it is the applicant), we have already written about this company from the Cayman Islands.