Japanese crypto exchange Fisco is accusing Binance of failure to prevent laundering of assets stolen from Zaif in 2018. The lawsuit is filed in the Northern District of California. The defendant is BINANCE HOLDINGS LTD - one of the Binance’s offshore companies: 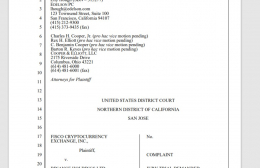 Fisco claims that hackers laundered 1,451 BTC through Binance. This was made due to allegedly weak KYC / AML practices that are “lower than standard.” Moreover, Binance employees contributed to this criminal activity and / or even participated in it.

Fisco acquired Zaif in 2018 shortly after the hack. Over $ 9 million of stolen assets were laundered through Binance, Fisco claims. The company notes that analysts were able to track the movement of all stolen $ 63 million to one Bitcoin address. Subsequently, 1,451.7 BTC were sent from it to Binance addresses.

“Shortly after the hack, Zaif representatives asked Binance to freeze the accounts associated with the stolen bitcoins. But the exchange did nothing,” the lawsuit says.
Fisco asks the court to recover from BINANCE HOLDINGS LTD more than $ 9 million and “just compensation for the time and money spent on the property search", a completely reasonable claim against Binance:

“There is a simple reason why the thieves laundered the digital loot they stole through Binance: despite being one of the world's largest cryptocurrency exchanges, Binance's 'know your customer' and anti-money laundering protocols are shockingly lax and do not measure up to industry standards, - Fisco said. - The thieves were able to launder the bitcoins stolen in the Zaif hack through Binance because Binance failed to implement security measures that were standard throughout the industry.”
Furthermore, the plaintiff states that Binance had knowledge that the stolen cryptocurrency had been transferred to its wallets and had the ability to freeze it:

“Binance could have done so before some or all of the stolen cryptocurrency left the exchange, but it did not do so. Binance either intentionally or negligently failed to interrupt the money laundering process when it could have done so.”;
Fisco claims that as a result of Binance's lack of action, both Zaif's customers and the exchange itself suffered financial harm.

We remind that in September 2018, unknown attackers hacked the Japanese exchange Zaif. It took the developers more than 4 days to discover the problem. During that time the hackers managed to withdraw the main crypto assets of the exchange. Soon after the incident, Zaif was acquired by the investment company Fisco. It promised to compensate the full damage to all platform users who lost money from this hacker attack.шаблоны для dle 11.2
02.10 13:42