Weixing Chen, one of Binance’s first investors, is going to file a lawsuit against the exchange in relation to an understated estimate of his shares’ value. The fact is reported by a Chinese journalist Colin Wu: 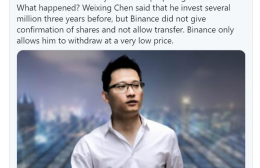 Exclusive: Binance’s early investor is preparing to sue Binance. What has happened? Weixing Chen said that he had invested several million three years before, but Binance did not give the confirmation of shares and did not allow the transfer. Binance only allows him to withdraw at a very low price.
Chen Weixing, a well-known crypto investor and businessman, has declared that he had purchased a 5% stake at the stage of Binance’s launch in October 2017. The startup’s value was estimated at $70 mln at that point, but it quickly grew into the world’s largest crypto exchange with a daily turnover being in the billions of dollars, but alas, they are trying to strip his due profit, and he is forced to go to court.

According to WuBlockchain, Binance’s current value must be approximately equivalent to Coinbase’s presumed capitalization, which is estimated at $10 bln. However, Binance has agreed to buy out Weixing’s stake only based on an estimation of about $600 mln, instead of the “far-fetched and fabricated”, like all of Binance’s amounts, estimation of $10 bln.

WuBlockchain states that it isn’t the only such case related to Binance, there are plenty of them. “Lots of stake lawsuits filed against Binance are still going on, the key cause for which is the blind financing of July 2017. Binance has a great many physical companies, therefore it’s going to be difficult to sue it,” the portal writes. Let’s assume that Binance has concluded a NDA with a trader obliging it to pay them a compensation, and then just changed its mind, even though a NDA is an official document. Deceiving and manipulating is the Binance casino management’s policy of doing business, and they cannot and don’t want to behave in any other way.

Commenting on the messages in this regard, Binance's co-founder Yi He has stated that the early investors in BNB tokens and in the exchange itself had received high profits. She noted that Binance reserved the right to file lawsuits against the people spreading negative comments on this issue. Yi He refused to give any comments on the exchange’s relations with Weixing as she didn’t see fit to publicly discuss the facts of fraud committed by Binance.шаблоны для dle 11.2
29.09 10:26