The well-known analyst Larry Chermak criticized the head of the cryptocurrency exchange Binance Changpeng Zhao, as usual on the case and to the point. Changpeng Zhao spoke out in support of the dubious SUSHI token, which was listed on Binance shortly before its sharp drop (value). Larry Cermak pointed out that Binance is obliged to protect user funds at the stage of project evaluation, and not add solely for money and trade against its own users. 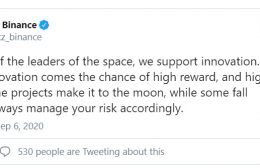 Over the weekend, the price of the SUSHI token collapsed by more than 2 times, after the platform owner sold over 50% of the developer fund with assets of $ 27 million. In response to criticism from the users affected by the dump, Changpeng Zhao urged not to forget about risk management, namely, how we previously recommended not to trade or hold assets on the Binance casino exchange at all. He emphasized that the Binance scam exchange he runs is committed to supporting innovation, but he forgot to mention the exchange trading against its users. Along with the latter comes not only the chances of seeing the price rise, but also the risk of a complete failure, especially when this failure and the loss of money by Binance traders are predicted in advance.

During the ensuing discussion, the head of Binance indicated that investing in any coins carries risks, including, by risk, he understands - fraudulent activities of the Binance exchange. DeFi tokens are no exception. According to Zhao, Binance is only a liquidity provider. Therefore, if the current coins are not included in the listing, the platform will lose in the competition. The head of the exchange noted that he does not know the founder of SushiSwap, and the platform does not call for purchases of the native protocol token.

Chermak, in response to a deleted tweet from Changpeng Zhao (who often likes to delete his tweets for obvious reasons), ironically, explained that Binance is constantly improving its due diligence on the listing. When such failures occur, such as with SUSHI, Changpeng Zhao, as the analyst considered, simply unsubscribed and was like that.

Can’t have it both ways. CZ is constantly flexing how Binance’s listing team does the most due diligence and how its listed projects perform the best. When it doesn’t work - “we are only providing access to liquidity so other exchanges don’t make us obsolete” LMAO 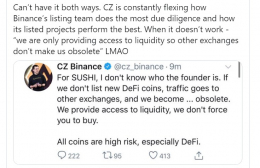 Cermak did not hide ridicule in relation to another remote post of Changpeng Zhao. In it, the latter complained that DEX had an advantage over centralized exchanges, since it would never occur to anyone to complain about the listing of SUSHI. In response, The Block analyst urged to treat these words without attention, or in general, as trolling over traders. Cermak noted that exchanges like Binance are building the listing process in such a way as to minimize exit scams. 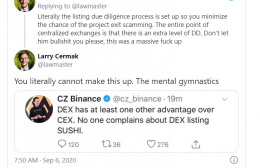 Not all users agreed with Cermak's arguments. Among those who actually supported him was the famous trader Michael van de Poppe. He drew attention to Zhao's previously published token listing form on Binance.

A prerequisite in it is to mention the name of the founder of the project or his leader in case of unforeseen circumstances. Wang de Poppe suspected impartiality in Zhao's recent tweets and called on the community to rate them. 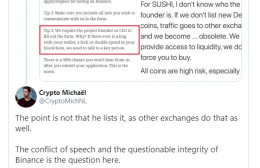