The Binance crypto-casino exchange received a notification from Roskomnadzor about the site's entry into the register of sites prohibited in the Russian Federation for information on the sale of cryptocurrency: 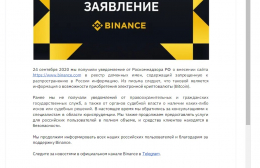 In an appeal to users, the exchange reported that it had not previously received notifications from law enforcement and civilian government services, as well as from the judiciary about the presence of any claims and court decisions. Binance turned to lawyers for help. Despite the notification, the exchange will continue to serve users from the Russian Federation and the scam exchange intends to challenge the decision of Roskomnadzor:

“Binance values its reputation in the Russian market, and we will challenge this decision in court. In addition, we are considering the possibility of using alternative technological solutions. We will inform our Russian community about all our steps, ”said Gleb Kostarev, director of Binance in Russia.
At the time of publication, the main domain Binance.com is available for visiting in the Russian Federation. Also, it has not yet appeared on the list of prohibited on the RKN website.

“In addition, this is the procedure: RKN enters the site into the register, sends notifications, and if the material is not deleted, then it is “actually blocked”. There were cases when the resources fell into unloading only after the expiry of the appeal period, ”the expert noted.
According to the exchange, they received a notification on September 24. It says that "the site contains information prohibited for distribution in Russia." "It follows from the letter that this is information about the possibility of acquiring electronic cryptocurrency (Bitcoin)," the representative added.

He noted that before that they were not aware of any proceedings against them by law enforcement and civil government services, as well as by the judiciary.

The State Duma of the Russian Federation adopted the law “Digital financial assets” in July regulating the turnover of cryptocurrencies. It actually prohibits accepting cryptocurrency as payment for goods and services and disseminating information about such offers.

The Binance website was included in the list of prohibited on the basis of the decision of the Mirny City Court of the Arkhangelsk Region dated June 2, at the request of the City Prosecutor's Office: 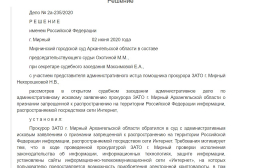 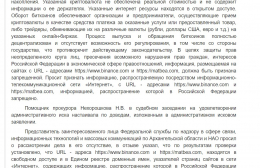 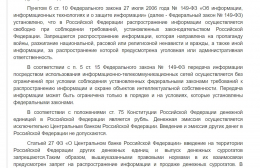 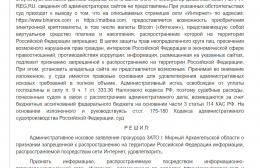 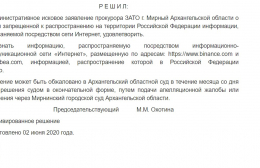 The court refers to paragraph 6. 10 of the Federal Law of July 27, 2006 No. 149-FZ "Information, Information Technologies and the Protection of Information", according to which "the dissemination of information [...], for the dissemination of which provides for criminal or administrative responsibility, is prohibited," as well as Article 27 of the Federal Law "the Central Bank of the Russian Federation ”, according to which the introduction of other monetary units in the territory of the Russian Federation and the issue of monetary surrogates are prohibited.

“Thus, the above legal norms in their interconnection provide for a ban on the dissemination of information on the sale of monetary surrogates,” the decision says.


Binance cheating again
Binance spokesman Gleb Kostarev deceived the public or is simply not aware of such a moment as - Roskomnadzor is not authorized to determine the legality / illegality of information on sites. In its letter, the RKN can write only about a specific decision of the court or other authorized body, by the decision of which the RKN makes a blocking. In this particular case, the fraud Binance decided to block the Mirny City Court - Arkhangelsk Region by a decision of 06/02/2020, this is easily verified in the Eais.rkn.gov.ru registry.


Blocking Binance in other countries
Earlier, a number of other countries banned the activities of the pseudo-exchange Binance without a license on their territory, China can be canceled - which has repeatedly stated this publicly. Japan and Hong Kong also demanded that Binance casinos obtain a license and a ban on activities in the territories of these countries. Malta not only banned Binance from working, but also denied the lie about the existence of an office in the country. Malaysia is a progressive state and also, a ban on the Binance scam in the country. Brazil  - a similar ban on the underground casino Binance,   because no one wants to see in their country the activity of scammers without offices, legal addresses and a casino that plays against its traders, is engaged in outright fraud in the crypto environment   .     шаблоны для dle 11.2
28.09 10:02