According to data from registration offices, Binance cryptocurrency exchange is registered in the Cayman Islands and the Seychelles.

In 2017, Binance registered Binance Holdings Limited in George Town, Cayman Islands. Documents on the corporate structure show that it was registered as the company’s headquarters. In March 2018, Binance used that address when registering several trademarks with the Binance’s name and logo.

These actions might lead to serious consequences for the company’s operations in the European Union. The EU has already declared it would add the Caymans to its tax havens blacklist.

In 2019, Binance registered Binance Investments Company in Mahé, Seychelles. The company made tactical investments, such as an investment in a Chinese media company Mars Finance in September 2019. Binance always had trouble finding a country that could reliably serve as the base for its operations. It first launched in Shanghai, but then in September 2017, as the Chinese government was angling towards banning the cryptocurrency exchanges, Changpeng Zhao, the company’s CEO, opted to move to Japan.

The company’s staff relocated to Japan, but two weeks later the Financial Services Agency of Japan mandated they acquire a license, the requirements for which were quite harsh. So, Zhao decided that Malta would become the company’s new home:

“The company has offices and staff in Malta, and all the legal requirements are being met, but it's not a headquarters in actuality, but rather, in spirit. When people think of Binance, they think of Malta,” commented Ted Lin, the company’s Chief Growth Officer.
“The staff in Malta offices get really offended by insinuations that Binance has no presence there. As you can see on their website, the offices are still recruiting personnel to work in regularity compliance assurance, security and customer service. As the leaseholder, I can assure you they’re continuing to grow and expand,” said Alexandre Dreyfus, the CEO of Chiliz.
Contrary to that, there have been some claims that the company's presence in Malta is nothing but a sham and that its 2018 financial reports contained no information on transactions, deals, and amounts of taxes paid. An investigation launched by The Block revealed that the majority of the company's technical personnel had remained in Shanghai. According to the report, hundreds of employees worked there before the closure. The response from Binance, as always, is reminiscent of a quip:

“Binance has no office in Shanghai and hasn't had one there for over two years,” the company stated. Previously they also noted that, “Office and HQ are old concepts like the SMS and MMS.”
Binance closed the Shanghai office after a police raid

One of the Binance's biggest offices, based in Shanghai, was closed after a police raid, reports The Block, citing reliable sources. According to the outlet, the office counted more than 100 employees, including top management. The team has partially relocated to Singapore, while the others have switched to working from home.

The Binance Press-secretary, as per usual, spouted lies to the public and stated that the exchange didn't have a fixed office in Shanghai, while The Block claims that they've seen the photos of the company’s Shanghai office. The company’s representatives have declined the requests from ScamBinance for comments regarding the situation. A day before it unfolded the company’s CEO Changpeng Zhao tweeted, “Office and HQ are old concepts like the SMS and MMS,” which is just another bogus claim from one of Binance’s scam artists: 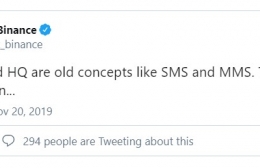 The head of the Binance cryptocurrency exchange Changpeng Zhao said he was planning on suing The Block for publishing the story on the closure of the company’s Shanghai office.

Thursday, citing “reliable sources”, the outlet published the news that the exchange's office was closed after a “police raid”. The Block claimed the office counted more than 100 employees, including cadres from top management. It also claimed part of them relocated to Singapore following the closure.

The official confirmation came from China: a local TV station aired a piece on the Binance office which was closed in the course of a counter-cryptocurrency operation. According to the reporting, the office housed the company called BABI Finance, linked to the cryptocurrency exchange. The employees were mainly providing tech support to Binance. 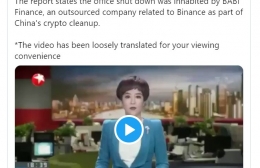 The Binance representative responded almost immediately, claiming that the company didn't have an office in Shanghai. In turn, Changpeng Zhao called such reports “irresponsible” and demanded the outlet publish a refutation and an apology for this “fake news.”:

The Block later corrected the initial publication, adding that the office was closed following “a visit from the authorities”, but it is clear it still maintains that the reporting is correct.

Moreover, on Friday night, the outlet's Director of News Frank Chaparro published a new report, stating he felt compelled to put an end to this matter. He released photos of the alleged Binance Shanghai office and said that he spoke on the matter with many people, including journalists from a Chinese outlet Caijing.com. They had allegedly visited the office on October 29th, while it was still operational, and then again yesterday (Friday), when it was already abandoned by the exchange’s staff. 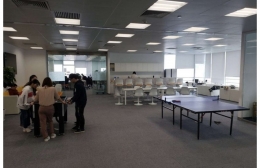 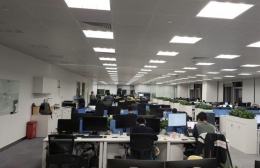 Binance CEO Changpeng Zhao stressed he intended to sue The Block, even though both the regular customers and journalists can easily see through these thinly-veiled lies: 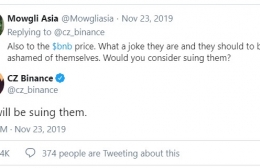 The Binance office debacle doesn’t stop there. The company refuses to answer questions regarding its registered and physical addresses. It also hides its legal information while blatantly lying to its customers. This article on "The way Binance exchange hides its legal structure from regulatory authorities and customers" will be helpful to anyone clueless as to what garbage pit they put their money into and what shady casino they’re trying to trade in.

Despite all of his legal troubles with China, to this day Changpeng Zhao continues to lie not only to the customers, but to his employees as well, regarding his ties to the Chinese officials, in an attempt to illegally maintain his company’s fraudulent activities in China.шаблоны для dle 11.2
14.09 16:48