The Japanese Financial Services Agency (FSA) warned the leading cryptocurrency exchange Binance of the need to obtain a license to continue working in the country. This is reported by Nikkei:

According to the regulator, the Binance’ operation in Japan without the respective FSA’s licence violates the local law on payment services and thus endangers the interests of investors. Moreover, if the cryptocurrency exchange does not stop its Japanese operations it will face criminal charges. As the famous cryptoentusist WhalePanda noted, the FSA decision is based on common sense, as Binance is not registered in Japan and allows opening accounts without following the KYC/AML procedures.

On Friday, March 23, the Financial Services Agency of Japan (FSA) officially informed that is has issued a warning to the Binance cryptocurrency exchange that a license is required to continue working in the country: 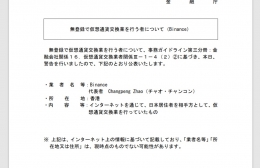 We remind that the Binance’s Chief Executive Officer Changpeng Zhao called this news “irresponsible” and declared that his company is, on the contrary “in a constructive dialog with FSA, in a translation into human language, the Binance’s CFO Changpeng Zhao, as has been adopted at Binance, lied and deceived users with words: 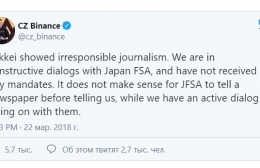 “Nikkei has shown irresponsible journalism. We are in constructive dialogs with Japan FSA and have not received any mandates. It does not make sense for FSA to tell a newspaper before telling us, while we have an active dialog going on with them”, said then Zhao.
However, the FSA official report does not specify whether the regulator plans to bring criminal charges against the marketplace, as reported in the Nikkei’s article. In his turn, Changpeng Zhao confirmed receipt of the warning, but called on the community “not to worry”: 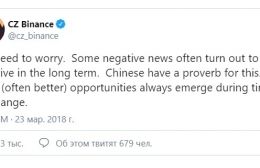 “No need to worry. Some negative news often turn out to be positive in the long term. Chinese have a proverb for this. New (often better) opportunities always emerge during times of change”, Zhao stated.

In the meantime, Zhao noted that the company is continuing negotiations with the Hong Cong authorities the results of which are so far unclear. In February, Binance received a warning from the Hong Cong Securities and Futures Commission (SFC) on the need to stop trading in digital assets which, according to local legislation, have the properties of securities: 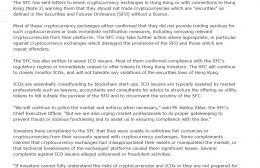 According to Zhao, he did not stop discussions with the Hong Kong authorities, but the negotiations brought no certainty. Referring to an anonymous source familiar with the situation, Bloomberg notes that Binance was one of 7 cryptovrency exchanges that received a letter of warning from the Securities and Futures Commission of Hong Kong with a demand to stop trading in digital assets that fall within the definition of securities under local law.

At the moment, namely, August 2020, Binance escaped from Japan (closed the office, changed data in the domain Binance.com) and did not obtain any license to work in Japan, either generally or in other regions or countries of the world. Clandestine and underground activities continue, but without lies about Hong Kong, Japan or Malta – but solely in secret, hiding real location and legal data of Binance from the users.шаблоны для dle 11.2
03.08 18:04