Malta Financial Services Authority (MFSA): Binance is not licensed to operate in the country

The Malta Financial Service Authority (MFSA) stated that the bitcoin exchange Binance did not receive a license for operation in the jurisdiction. This is reported on the Authority's website Mfsa.mt:

“Admission of virtual financial assets to trading and/or for their offering to the public on the country’s territory requires an MFSA licence pursuant to the Virtual Financial Assets Act (CAP 590) of 2018”, explains the regulator. 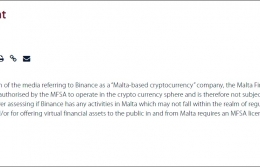 The Authority’s representatives stressed that they were clarifying whether Binance was currently providing services without the appropriate permits. Binance exchange CGO Ted Lin recently said in a conversation with Decrypt:

“We have offices in Malta for retail services, there are some employees responsible for compliance, but there is no headquarters as such”.

In a conversation with journalists, CEO of Binance reminded that his company was operating in Japan and had a constructive dialogue with the Financial Services Authority. However, these negotiations resulted in a warning from the regulator that a license was required to continue working in the country.

Among other things, Zhao noted that the company continues to conduct negotiations with the Hong Kong authorities, the results of which are still unclear. Thus, in February, Binance received a warning from the Hong Kong Securities and Futures Commission on the need to stop trading in digital assets, which, according to local legislation, have the properties of securities.


Exodus of the Binance’s scam on Malta:

Binance Exchange lied a lot about Malta after it escaped (tried to escape) to the Maltese jurisdiction from Japan - where mandatory regulation of the cryptocurrency market was introduced. At the beginning of 2018, Binance planned to open an office in Malta. According to Changpeng Zhao, CEO of Binance, his company intended to open soon a trading platform in Malta where, in particular, the exchange of fiat currencies for digital money would be available. For this purpose, links were established with local banks, which should be able to ensure a possibility to deposit and withdraw funds “without setting time limits”:

“We are very confident we can announce a banking partnership there very soon”, Zhao added. “Malta is very progressive when it comes to crypto and fintech.”
In summer 2018, Binance has set up a bank account in Malta, Changpeng Zhao, the CEO and founder of Binance, announced. It was meant to bring the exchange closer to its plan to launch on its platform fiat-to-crypto currency deposits with the possibility of withdrawal of funds. It was also expected that the availability of a bank account in Malta would increase the exchange's liquidity and facilitate entry for new investors.

Changpeng Zhao described the opening of the new bank account as a “very significant’ development since the moment the exchange first revealed it was relocationg its headquarters to Malta (which turned out to be another lie). According to the head of Binance, he was hoping that mixed fiat-crypto trading would be launched at Binance “within a year”. The exchange's plans included offering this service in Uganda and potentially in Asia. The company was conducting negotiations with the Malta Stock Exchange about possible future cooperation.

Soon Changpeng Zhao posted a tweet saying that to date, neither Binance nor any other crypto currency exchange has a license of the Maltese regulator. 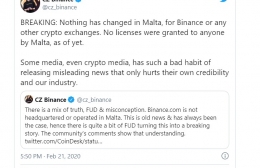 The scamulent exchange Binance continues to jump around the world having no permission from any country in the world. But every time it promises that everything will be soon OK. Also, it does not forget to “carry” the Binance's headquarters with it, one day to Japan, another day to Hong Kong or Malta... – but as a result of all this lie - Binance has no regulation in any country of the word, and Binance’s headquarters conceals where it is located. Binance's underground and completely illegal activities will end sooner or later.