Casino Binance officially announced to users from South Africa that access to margin trading, leveraged tokens, as well as cryptocurrency derivatives (futures and options). Binance attributed the move to a desire to comply with local laws. South African users were also banned from opening new accounts for these products. Customers were given 3 months to close their positions - on January 6, 2022 they will be automatically liquidated: 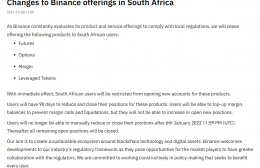 On September 21, 2021, the South African Financial Services Authority urged investors to be "careful and vigilant" when dealing with Binance. The South African regulator noted that the casino exchange Binance is not authorized to provide financial advice and intermediary services in the country, the exchange does not have a permit or license for these activities.

Previously, Binance has imposed restrictions on users from Singapore and several other countries where the casino has attracted the attention of regulators. Let's see how Binance's activity in other countries ended and how Binance will run in Singapore, Ireland and promise users about "getting licenses and opening headquarters in every country and city," on the Moon and Mars.шаблоны для dle 11.2
13.10 16:43