Another bluff: Binance will open HQ in Ireland 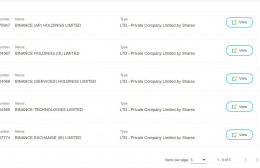 Until recently, Binance operated under the scheme of "decentralized approach to organization", which implies the absence of certain offices or headquarters, or rather, such a system allowed to escape from regulators around the world. Binance later acknowledged that this approach was inconsistent with regulators' notions of acceptable business practices and allegedly to "divert attention," it promised to open headquarters around the world:

"We've always maintained that we don't have a headquarters. But now we are in the process of opening several headquarters in different parts of the world.
Surprisingly, Changpeng Zhao stated that Ireland is listed in the company's plans to establish several headquarters around the world and that five legal entities are allegedly being opened for this purpose. As of February 2022, apart from "words and promises" Binance has not opened a single office and continues to avoid regulation with all its might. Binance's philosophy and criminal business has not changed since 2017, this has happened in China, Hong Kong, Japan, Malta and even Singapore. Everywhere, Binance promised to get licenses and open offices, it's been 5 years. Promises are heard every month, every year, every quarter, but in 5 years Binance did not want to open a headquarters, hides this fact of office location.шаблоны для dle 11.2
06.10 15:31