Bitcoin casino Binance, as well as a number of other exchanges, for example - Huobi, once again allegedly stopped the registration of new users in mainland China after a new wave of repression against cryptocurrencies from the Chinese government and the Central Bank of China. It is worth noting that Binance has repeatedly stated that it will stop operations in China, but all of these statements turned out to be false, Binance is still providing services to residents and residents of China. 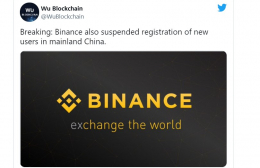 Binance banned customers from using Chinese phone numbers to register new accounts. Hong Kong residents can still create wallets on both platforms, according to the agency. Speaking to Bloomberg, a representative of Binance officially stated that the company does not conduct operations in China and blocks the corresponding IP addresses (which is an outright lie according to ScamBinance). He did not want to comment on the ban on local phone numbers.

"Binance takes its compliance obligations extremely seriously and is committed to following the regulations of local regulators wherever we operate," Binance said.
Western media confirmed that Binance has also stopped registering accounts with Chinese phone numbers, removing the relevant code:

"Users from China have not been able to access our site since 2017. We now have no exchange business in China. We take our legal compliance obligations seriously," 8btc quoted Binance as saying.
On September 24, another crackdown on China's cryptocurrency industry came to light. The People's Bank of China (PBOC) described as illegal the activities of platforms that provide exchange of digital assets among themselves or in fiat. Prior to that, Wen Xinxiang, director of the NBK's payments and settlement department, called cryptocurrencies and staplecoins a threat to the traditional financial system.

China, the place where Binance appeared in 2017 and was prosecuted for securities transactions. Chinese search engines excluded the casino exchanges Binance, Huobi and OKEx from output and regularly banned the accounts of Binance representatives. The Chinese social network Weibo blocks the accounts of exchanges Huobi, OKEx and Binance on a regular basis. The main beneficiary and owner of Binance - Guangying Chen (Heina Chen), lives and works in China, according to the Chinese authorities, Binance continues to conduct its illegal activities in China.шаблоны для dle 11.2
28.09 22:05