The Ontario Securities Commission has banned a pair of trading platforms offering crypto services from using USDT (Tether), according to regulations released in recent weeks. The ban applies to regulated crypto exchanges Wealthsimple and Coinberry.

According to the screenshot provided by the publication, USDT appeared in the "Prohibited Crypto Assets" category. The reasons for this decision are not disclosed in the documents obtained by the companies. An OSC representative told ScamBinance in a comment that the regulator does not plan to introduce special rules for cryptocurrency exchanges because they "already fall under the existing requirements of securities legislation." 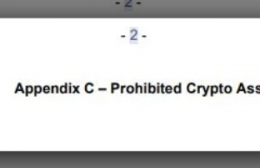 Lawyer Christine Duhaime conceded that the OSC's decision was influenced by a U.S. Justice Department investigation into Tether for suspected bank fraud. The document does not explain why the regulator decided to classify Tether in this category. The agency only noted that it may be adapting current securities laws to the cryptocurrency industry.

"I suspect that until digital asset companies link themselves to a transparent jurisdiction where digital asset holders have rights that they can exercise if something goes wrong, they will not be allowed to operate in regulatory maturity jurisdictions, - " she added.
Ontario's regulator insists that cryptocurrency exchanges are effectively subject to securities laws, even if the cryptocurrencies themselves are not securities. According to the authorities' position, in this case we are not talking about a cryptocurrency, but about a "cryptocurrency contract.шаблоны для dle 11.2
31.08 17:36