On August 21, a Twitter user under the pseudonym RealFulltimeApe identified himself as a former employee of the European division of Binance and accused the trading platform of deceiving users. He claimed to have audio and video evidence. As of this writing, the tweet has been deleted and the user's account has been deleted or blocked. However, a screenshot of the posts is published on Reddit: 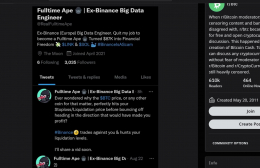 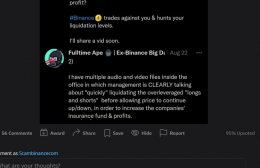 The cryptocurrency exchange Binance has spoken out against allegations of market manipulation and said it "reserves the right to go to court to protect its own interests," although there are already at least 2 class action lawsuits against Binance. Binance Casino continues to portray itself as a "virgin of the financial market", although Binance has been and continues to be caught by the hand at the time of the theft on a regular basis. And manipulation or falsification of trading volumes by thousands of times is a "normal" practice of Binance and a number of other crypto exchanges, and the crypto sphere in general. 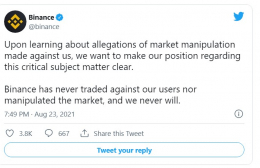 "Upon learning of the allegations of market manipulation made against us, we want to clarify our position on this important issue. Binance has never traded against its users or manipulated the market, and never will," the statement said.
The exchange did not elaborate on why it posted the release. It expressed hope that as the industry's relationship with regulators strengthens, the number of "FUDs and individuals with malicious intent, including those posing as Binance employees," will decrease.
шаблоны для dle 11.2
27.08 12:42