We recommend you to read:
- Binance pseudo-exchange cheats financial regulators and users in Australia
- Binance users from Australia are considering a class action suit because of Binance's disruptions
- Investors have sued Binance collectively for tens of millions because of the outages on the futures platform
- Binance Insurance Fund: Fraud with the shutdown of the futures platform on May 19 (technical analysis and evidence)
- Active Community Action Against Binance Casino

So, it has come to pass. It's happened - the thing that everyone had been waiting for long and hard. The collective suit of international traders against Binance casino and their fraud. A group of international traders filed a lawsuit against the cryptocurrency exchange Binance. They accused the company of failing to provide access to infrastructure during peak periods and multimillion losses, we're talking about traders from Australia (after the fraud on May 19), joined by other traders from many countries. Recall that we encountered such a problem on September 21, 2018, in that time, Binance has not corrected anything, and still continues to engage in blatant exchange fraud.

The plaintiffs are six traders from Ukraine, Australia, France and the United States. They estimated the claim at more than $20 million, and hope that several hundred investors will sign up to their complaint. Francis Kim, one of the participants in the class action lawsuit we know from investigations surrounding the liquidation of the offshore company Binance Holdings Limited (Cayman Islands).

The digital asset market collapsed in May amid restrictions from Chinese authorities. Traders allege that on May 19, the Binance futures platform experienced a failure that caused it to be inaccessible. The traders' positions were forcibly liquidated because they were unable to adjust their positions.

The Swiss company Liti Capital will contribute at least $5 million to fund the lawsuit against Binane in Hong Kong, and the plaintiffs will be represented by the New York law firm White & Case.

"One way or another, this case is going to be a landmark case. We're going to find out what restrictions, if any, exist on what these huge organizations can and cannot do," said Liti Capital Executive Chairman David Kaye.
In July, the Italian law firm, Lexia Avvocati, filed a similar lawsuit against Binance. Together with the Swiss Blockchain Consortium, it is acting on behalf of the traders affected by the disruption.

Lexia Avvocati said that the exchange has agreed to compensate customers for some of the lost money and called the amount of compensation "pathetic" and "ludicrous. The firm intends to seek regulatory restrictions for Binance in Switzerland and the European Union.


Participating in a class action lawsuit 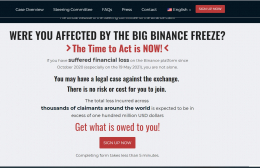 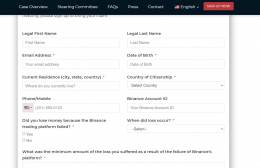 Important: The class action lawsuit does not require your financial participation; you do not risk or have to pay anything. Liti Capital assumes all expenses (including financial) for the lawsuit.

Traders have established a Steering Committee to guide their pursuit of recovery against Binance for losses caused when the world’s biggest cryptocurrency exchange failed Geneva Switzerland:
On May 19, 2021, when markets were turning red, Binance’s platform failed. As a result, the trading accounts (including Futures, Margin, and Leveraged Token products) of at least 700 and potentially thousands of individuals were effectively untradeable for hours, causing traders to suffer losses that may exceed one hundred million dollars.
Binance account holders who traded on the platform and suffered losses then and possibly at other times as a result of the platform’s failure can seek compensation from Binance. A number of traders have tried to resolve matters with Binance short of pursuing legal claims, but so far have been unsuccessful. If traders seeking compensation are unable to resolve their disputes with Binance satisfactorily, they may submit disputes to international arbitration, a costly step for an individual. Several traders that suffered losses due to the failure of Binance’s platform intend to seek compensation from Binance, including through arbitration, if necessary. Initially advised by Ms. Aija Lejniece, a Paris-based arbitration attorney, these traders have established a Steering Committee to provide guidance and information about the claims process against Binance.
The Steering Committee has arranged for Liti Capital SA, a Swiss-based blockchain private equity fund specializing in raising capital for legal cases, to provide funding in order to permit individual traders who suffered damages as a result of the failure of Binance’s trading platform to pursue the claims process. Litigation finance is frequently used by claimants to pay for the costs of preparing and pursuing legal claims in exchange for a minority percentage of compensation received.
Liti Capital, the first and largest private equity fund on the blockchain, uses LITI token to raise capital to invest in cases they believe have merit. Liti Capital’s funding will enable affected individuals to pursue claims, including, if necessary, in arbitration, for compensation against Binance. The international law firm of White & Case LLP has been engaged to represent affected individuals in the claims process. The Steering Committee counts Ms. Lejniece, Mr. David Kay of Liti Capital and three of the affected traders among its members.
Individuals who believe they were damaged by the failure of Binance’s platform and wish to seek compensation may contact the Steering Committee for more information by email at [email protected] or may refer to its website at Binanceclaim.com.
For all media enquiries, please contact: [email protected] 'For further information, please contact the Steering Committee via our press team on +44 (0) 7943 774236 or by emailing [email protected]'
шаблоны для dle 11.2
19.08 19:58