BitMEX agrees to pay $100 million in settlement of claims by U.S. authorities

Cryptocurrency derivatives exchange BitMEX has reached a settlement with the Commodity Futures Trading Commission (CFTC) and the U.S. Financial Crimes Enforcement Network (FinCEN). As part of the settlement, the exchange agreed to pay $100 million: 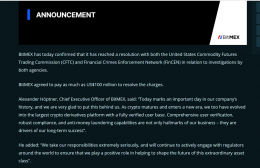 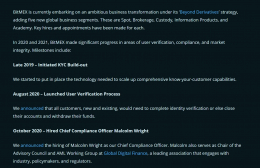 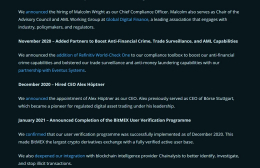 BitMEX, which acted as an unregistered futures contracts seller (FCM) and provided funds transfer services, willfully failed to comply with its obligations under the BSA. FinCEN's actions are part of a global agreement with the U.S. Commodity Futures Trading Commission (CFTC).

"BitMEX's rapid rise to one of the largest futures traders offering derivative convertible virtual currencies without a proper anti-money laundering program puts the U.S. financial system at significant risk," said FinCEN Deputy Director Annalu Tirole. "It is critical that platforms ensure financial integrity from the outset so that financial innovation and capabilities are protected from vulnerabilities and exploitation."

From about 2014 through 2020, BitMEX allowed customers to access its platform and trade derivatives without proper customer verification - collecting only an email address and not verifying customer identity. Despite BitMEX's public statement that its platform did not do business with U.S. persons, FinCEN found that BitMEX failed to implement appropriate policies, procedures, and internal controls to verify customers who use a virtual private network to access the trading platform and circumvent Internet protocol monitoring. In some cases, BitMEX's senior management altered customer information in the U.S. to conceal a customer's true location.

In addition to paying a civil penalty, BitMEX has agreed to hire an independent consultant to conduct a historical analysis of its transaction data, sometimes referred to as a "SAR review," to determine whether BitMEX should file additional SARs regarding this activity. BitMEX will also engage an independent consultant to conduct two reviews, including appropriate testing, to ensure that appropriate policies, procedures and controls are effective and reasonably designed and implemented to ensure that BitMEX does not operate in whole or in substantial part in the United States.

This is FinCEN's first enforcement action against FCM. FinCEN appreciates working closely with its partners at the CFTC on this issue. The CFTC and BitMEX separately negotiated a Consent Order requiring the payment of a civil monetary penalty with an additional equitable relief. FinCEN's $100 million assessment will be satisfied by immediate payments totaling $80 million to FinCEN and the CFTC, with $20 million suspended pending successful completion of SAR and independent consultant reviews.
BitMEX was founded in 2014 by Arthur Hayes, Ben Deal and Samuel Reed. On October 1, 2020, U.S. authorities charged them with violating bank secrecy laws, including insufficient anti-money laundering measures, after which the exchange's management changed completely. BitMEX, which had ignored most existing laws in the past, decided to verify all users, and Heptner took a course to cooperate with regulators. The trial of the exchange's former managers on criminal charges brought by the Justice Department is scheduled to take place in March 2022. BitMEX's latest publication makes no mention of the circumstances surrounding them.

"Today is an important day in our company's history, and we are very happy to put this whole situation behind us," said BitMEX CEO Alexander Heptner. - As the cryptocurrency industry has evolved and entered a new era, we too have grown into the largest crypto derivatives platform with a fully verified user base. Comprehensive user verification, robust legal compliance measures and anti-money laundering capabilities are not only iconic features of our business, but also drivers of long-term success."
"We take our own commitments with extreme seriousness and will continue to actively engage with regulators around the world to play an active role in shaping the future of this outstanding asset class," Heptner added.
The company also noted that it is currently pursuing its "Beyond Derivatives" strategy, in which it is exploring areas such as spot market, brokerage, storage, information products and training, and has already made key appointments for each.шаблоны для dle 11.2
15.08 09:04