Brian Brooks (former head of the Office of the Comptroller of the Currency at the U.S. Treasury Department) is a well-known official who knows a lot about finance, and financial crime, has been hired by Binance for its U.S. casino, Binance.US. Brooks previously held an executive position at Coinbase. What is interesting is that as of 2020, Binance.US officially had only 2 people on staff - that is, all management of the Binance.us platform was done directly by the Binance.com team and only nominally, it was separate. 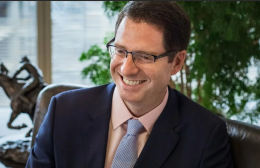 On April 20, 2021, Brian Brooks took over as the head of the US division of the cryptocurrency exchange Binance.us - it was clear why and why the Binance crooks hired this ex-officer. They needed to lobby the exchange in the U.S., as usual to deceive financial regulators and users in the U.S. (as they had done before, see the article about Operation Tai Chi). An attempt to become "their own" in a world where they are not welcome. We all remember how Coinbase refused to be in the Association of American Cryptocompanies along with Binance.US, this fact alone gives an understanding of how "the powers that be" treat Binance and its leadership Guangying Chen (Heina Chen) and Changpeng Zhao.

During his conversation with CoinDesk, Brooks expressed his opinion that the U.S. subsidiary is very likely to compete with Coinbase. He hoped that Binance US would be fully compliant with regulations and feature a wide range of products.
"I think it's pretty obvious that Binance is the fastest-growing exchange in the United States," he declared.
The plans were grandiose, praise and cheers to the skies - all right, as long as the crooks pay your salary and it doesn't do reputational damage to Brian Brooks, but something went wrong. Just four months in office and… resigned (quit). And what else to do, if under his leadership (nominal, only for appearance) Binance.US engaged and engaged in blocking users of the United States, fraud, theft of assets from the balance sheets of users and technical support while inactive - all these actions, Binance.US and Binance.com continue to carry out and now.

Today, August 6, 2021 Brian Brooks officially stepped down as head of the U.S. cryptocurrency exchange Binance.us, he announced officially on his Twitter: 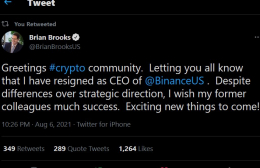 Greetings #cryptocommunity.
Let me inform you all that I have resigned as [email protected] Despite disagreements on strategic direction, I wish my former colleagues much success. Exciting new things to come!
No wonder executives of all ranks are jumping ship from Binance, the CEO of Binance Australia has resigned and the saintly Changpeng Zhao (CZ) is looking for a successor to shove all the responsibility onto. Throughout the world, Binance has problems and difficulties because of the financial regulators, more specifically the criminal business model of Binance. Even FTX bought its share from Binance which is "one team" and they obviously know more than they say and try to distance themselves from Binance in any way. Even, a number of financial funds refuse to work with Binance - the reasons are obvious.

In the US, Binance is also far from smooth, with Department of Justice and IRS investigations against Binance (Binance.com), CFTC investigations into Binance activity, CoinBase complaints about Binance outrage. Although, Binance is trying in every way to circumvent and deceive financial regulators, allowing for appearance of blocking U.S. users or displaying gratitude from U.S. law enforcement agencies.

All these events occur on a background of global changes inside Binance and regulatory pressure of SEC in the USA. Let's not forget that the US DOJ is threatening Tether with criminal charges of bank fraud in the US, and the Binance exchange is directly tied to Tether (as is the FTX casino exchange).

Binance CEO Changpeng Zhao (CZ) expressed confidence in Binance.US's ability to continue its criminal business due to the latest developments. He also noted that Brooks' departure will have "no impact" on users of the exchange. All in the spirit of Binance and its rotten PR department.шаблоны для dle 11.2
07.08 19:13