The British bank HSBC began blocking transfers to Binance, it concerns both bank transfers and transfers via credit and debit cards of clients.

According to the published screenshot of an e-mail from HSBC, the financial institution has begun to block transfers from credit cards to casino accounts Binance. The bank claims that the decision is due to a desire to protect its customers. HSBC also cited claims made by the Financial Conduct Authority (FCA) against Binance: 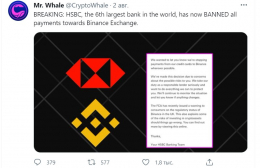 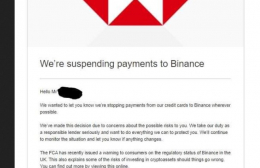 HSBC is blocking payments by its U.K. credit card customers to the cryptocurrency exchange Binance "wherever possible," the banking giant said Tuesday.
"We have informed HSBC customers in the U.K. of changes in this [crypto] space that may affect them," an HSBC spokesman said.
"We will not comment on individual securities exchanges or cryptocurrencies. We are focused on high AML and know-your-customer (KYC) standards and are closely monitoring developments, customer demand and regulatory changes in those markets," the HSBC spokesperson added.
Binance representatives, in their usual spirit of financial scams, said:

"We are disappointed that HSBC has made this decision and would welcome a dialogue to discuss any concerns they have," a Binance spokesperson said. "We take our compliance obligations very seriously and are committed to working with regulators to create policies that protect consumers, encourage innovation and move our industry forward.
HSBC UK cited a recent warning for Binance issued in late June by the U.K. Financial Conduct Authority (FCA), raising concerns about Binance's regulatory status in the country.

"It also explains some of the risks of investing in crypto-assets if something goes wrong," the bank said. Binance officials previously said the FCA warning applies only to Binance Markets Limited, a legal entity separates from the main global exchange, which operates through Binance.com.

After Barclays and Santander, HSBC became the third major British bank to stop credit card payments on Binance. The move is not entirely unexpected; HSBC announced its aversion to cryptocurrencies in May, when CEO Noel Quinn told Reuters that the bank would not engage in this asset class. HSBC had previously prevented customers from buying MicroStrategy stock because it represented a "virtual currency product" in the bank's eyes.

Over the past few months, Binance has faced increasing pressure from regulators around the world. In response, the exchange has limited the amount of leverage available from 100x to 20x, reduced daily withdrawal limits for unverified users and reduced trading in futures and derivatives across Europe. By taking such measures, Binance is trying to correct some of the problems noted by regulators. Changpeng Zhao, chief executive of the exchange, outlined the company's plans in a blog post, assuring customers and regulators that the exchange is taking steps to comply with regulations.