Rats are abandoning the ship: Binance is looking for a new CEO to replace Changpeng Zhao (CZ)

While everyone is discussing the news of reducing the daily withdrawal limit for accounts with basic verification from 2 BTC to 0.06 BTC, Binance pleases users and the public with a new joy. 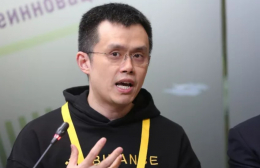 "There is always a choice of candidates who could succeed me. We're looking for someone with deep regulatory knowledge to take over and become CEO," Zhao said.
At the same time, he noted that the company is not limiting the timing of the search, and he himself will not leave his position immediately.

"I will always contribute to Binance and the BNB ecosystem. I don't have to be CEO to do that," - CZ added.
Multiple countries have issued warnings about Binance's unregulated status over the past few months. Changpeng Zhao has stated that he "would be honored to run Binance as a regulated financial institution" and that he will not leave the exchange, despite the actions of regulators, until he finds a better leader than himself.

As we said at the time, Changpeng Zhao is not the owner of Binance, but acts as - a wedding general (toastmaster) at this party of criminality, the real owner of Binance casino was, is and remains Guangying Chen (Heina Chen, Helen Chen). But what can happen (apparently we will find out about it later), that the rats begin to run away from the ship Binance and so on.

When the problems and risks of a criminal case against Tether began, publicly Sam Bankman-Fried (his cryptocurrency fund Alameda Research) and the FTX exchange said they had bought their shares from Binance. Regulators around the world began to ban and speak out against Binance's criminal activities, as well as deny service to many financial partners and banks. Even in Malta, where Binance was never based, but only lied about it - sued, for cheating a cancer charity on Binance, even sick people CZ and Binance were cheated (duped).

What can I add? Big changes are coming to Binance, and no one guarantees that they will be positive. Do not forget, about the goals and objectives of the project Scambinance.com - do not risk just for nothing, withdraw your crypto-assets from the exchange Binance, insure against any "coincidence" and "force majeure" of this illegal, underground casino Binance, before it is too late. But users are still reassured and promised:

In the ongoing process of transforming Binance "from a tech startup to a financial institution," the company intends to open several regional headquarters to make its structure clearer to local regulators.
It is quite difficult for regulators to understand our structure. For example, simple things like not having a head office. Now we want to open several headquarters in different parts of the world. We haven't decided exactly where they will be located," - Zhao said.
He also acknowledged that Binance has had a "bad experience" with regulators in the past, but that it now plans to hire former employees of relevant agencies and "become regulated everywhere." It's a shame that Binance has no plans to return stolen money from users and reimburse all fraudulent "force majeure." Apparently, the policy of ripping off users remains and will continue to improve.