U.S. DOJ: Tether is facing criminal charges for bank fraud in the U.S.

Just the other day, we described in our article The End of Bitcoin: Tether, Binance and the White Swans, which may lead to the collapse of bitcoin the significant risks of Binance Casino from Tether (without Tether, Binance Casino cannot operate - it is one cartel and one criminal grouping). And then there's news like the U.S. DOJ: Tether is facing criminal charges for bank fraud in the U.S. Under the regulation of staplecoins, which is the policy and vector of communication at the US Securities and Exchange Commission (SEC), it's quite reasonable to investigate Tether's criminal activities.

Tether feeds the entire crypto sphere with its "unsecured dollars", without these "fake dollars" it's hard to imagine what the environment and rates would be like. Binance cartel and FTX know it, as well as any more or less significant player on crypto market knows it, but keeps silent and never admits it, otherwise the faith in crypto market will be destroyed for eternity. Besides USDT (Tether), other stabelcoins, for example BUSD (Binance Dollar) stabelcoin, are also manipulated in the same way.

According to Bloomberg, the U.S. DOJ has initiated an investigation into possible bank fraud of the executives of Tether, the company behind the largest steblycoin USDT. The company is suspected of committing bank fraud. The U.S. DOJ intends to analyze the activities that Tether conducted in the early years of its existence. In particular, it is interested in whether Tether concealed the connection of its banking transactions to cryptocurrencies.

Tether has routinely opened a dialogue with law enforcement, including the Department of Justice, according to our commitment to cooperation and transparency," the company said.
"The notices signal that a decision to prosecute may be forthcoming, and senior Justice Department officials will ultimately determine whether the allegations are substantiated,"- the statement said.

According to one source, authorities have sent letters to individuals in recent months warning them that they were being investigated. Those letters said a decision to open a case could be made soon, after the DOJ determined the allegations were substantiated.

In 2017, Tether and its affiliated Bitfinex exchange sued U.S. bank Wells Fargo over the blocking of their transfers. They claimed that the bank knew of their intent to purchase U.S. dollars for the benefit of customers to issue tokens. The companies later dropped the lawsuit and were forced to turn to banks in other jurisdictions to service their accounts.

As Bloomberg notes, the current investigation suggests that the investigation may have shifted focus to bank fraud from the market manipulation that Tether has been charged with in the past. Bank fraud is easier and faster to prove than all of Tether's criminal activity, and bank fraud is an extremely severe offense in the United States.

"Today Bloomberg published an article based on unnamed sources and allegations from years ago, clearly designed to collect clicks. The article follows a pattern of repackaging outdated claims under the guise of "news." Continued attempts to discredit Tether will not change our commitment to remain industry leaders.

Tether has routinely opened a dialogue with law enforcement agencies, including the U.S. Department of Justice, as part of our commitment to cooperation, transparency and accountability. We are proud of our role as industry leaders in promoting cooperation between the industry and government agencies in the U.S. and around the world. We remain committed to our customers and the industry-leading technology and transparency that have led to our growth.
"Continued efforts to discredit Tether will not change our determination to remain a leader in the community," - the statement said. 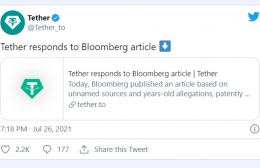