Binance has a long history of relations with China, starting with the creation of Binance in China by Guangying Chen (Heina Chen) and its hired director Changpeng Zhao, and ending with the current prohibition of Binance activities in China, even at the level of visiting the website Binance.com. The company Bijie Tech, on behalf of which the Binance project was launched (fully owned by Guangying Chen) - is also a Chinese company.

Almost immediately after the creation of Binance in China, accusations and investigations into their activities began pouring in. For example, Archive 2017: Chinese regulator on 60 ICOs: Investigation on illegal placement and sale of Binance securities, after this investigation Binance fled China and began their Great Escape across countries in an attempt to hide from regulation and continue their criminal activities. The Chinese police closed the Binance office in Shanghai and Changpeng Zhao lied about this event, after which the offices allegedly began to open in Japan, Malta and Hong Kong. But as time showed and check this information, Binance did not open offices anywhere, but just changed legal companies. It seems to us that Binance is still run from China to this day.

Interestingly, the Chinese government has long been monitoring the activities of Binance - the Chinese social network Weibo has blocked the accounts of exchanges Huobi, OKEx and Binance, and a month ago, the Chinese search engines excluded from the output of exchange-casino Binance, Huobi and OKEx. But, according to the Chinese media and the government, the Binance exchange continues its illegal activities in China illegally and clandestinely.

On July 8, many Binance users learned that the site had been blocked in China. The country's "Great Firewall" now prevents users from accessing the exchange, which means that it can only be visited using a virtual private network (VPN) service. Also, Binance's mobile app stopped working in China. It is important to note that Binance's competitors, such as Huobi and OKEx, are still available in China. 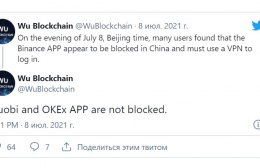 The Binance ban is part of a massive crackdown on cryptocurrencies in China, which last month eliminated the entire bitcoin mining industry in the country. Binance is also under heavy scrutiny from regulators around the world.

Binance's blocking was confirmed by Chinafirewalltest.com, which lists all banned resources in the country. In early summer, China's largest search engines Baidu and Sogou stopped providing links to websites of cryptocurrency exchanges Binance, Huobi and OKEx. However, the last two sites are still available to local users. Chinese authorities are systematically fighting cryptocurrencies. In May, local financial institutions and payment companies were banned from providing services related to cryptocurrency transactions. Investors were warned against trading in digital assets. In June, miners came under attack - four provinces banned them from mining cryptocurrency at once. As a result, every third miner stopped working in the country, due to which bitcoin and altcoins fell sharply in price.