The Financial Supervision Authority of Poland (UKNF) published a notice on its website that it is not engaged in the regulation of the cryptocurrency exchange Binance. The agency stressed that it decided to issue a warning after similar reports in other countries around the world. The agency noted that the core business of the Binance group's unit is brokerage services for the exchange of cryptocurrencies and digital assets: 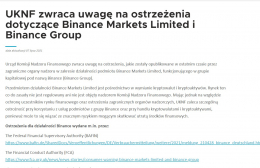 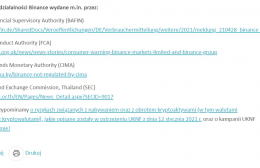 The Office of the Committee of Financial Supervision draws attention to the warnings that have recently been published by foreign supervisory authorities in the area of activity of the entity Binance Markets Limited, operating in the group of companies called Binance (Binance Group).

The subject of Binance Markets Limited is the intermediation of exchanges of cryptocurrencies and cryptoassets. This market is generally unregulated and not subject to the supervision of the Financial Supervision Commission. Bearing in mind, however, the protection of financial market participants as well as warnings from foreign supervisory authorities, caution is advised when using the services of Binance group entities and when trading cryptocurrencies and cryptoassets, as this may carry significant risks of losing funds.

The Polish Financial Supervisory Authority (UKNF) also cites recent notices from financial regulators in the Cayman Islands, UK, Germany and Thailand. In addition, regulatory and criminal investigations against Binance have been opened in Canada, Japan, the U.S. and Singapore.

Earlier this year, the Polish Financial Supervision Authority issued a warning about the risks of buying and selling cryptocurrencies as part of a campaign to raise awareness among investors. The agency did not specify whether it was going to take any more action against Binance, such as launching an investigation, as authorities in some other countries have done.