The Financial Services Authority of Japan (FSA) issued a new warning to cryptocurrency exchange Binance for operating in the country without a license and demanded the trading platform to stop operating in the country. The main purpose of the notice is to protect investors. The document does not specify whether the regulator plans to file any claims against the trading platform: 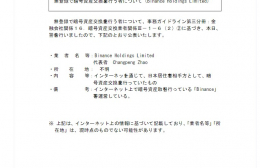 According to local portal Nikkei, criminal charges and fines could be filed against Binance. Since January 2018, Binance had already received a warning against operating in Japan without a license, since then, the offshore exchange Binance has not tried to obtain legal status as a financial institution in the country or to obtain a license, instead Binance fled to Malta (legally), where they were also asked to remove without licenses to serve individuals and businesses. According to the newspaper, the warning from the financial regulator could make the process of legalizing Binance in Japan more complicated, but in our opinion, unregulated Binance casino is not seeking to operate legally in the legal field either. Recall that in September 2020, major Japanese exchange TaoTao Inc. refused to cooperate with Binance.

The Financial Services Agency of Japan (FSA) has a negative attitude towards the underground exchange because it has not identified users from Japan, although there has been a ban on anonymous trading in the country since January 30. Each trader must have an account with one of the local banks. According to officials, Binance does not apply the necessary measures to combat money laundering, and several private coins are traded on the site. As the WazirX story in India shows, Binance facilitates financial laundering and sometimes actively participates in the theft of "criminal" assets, keeping them for itself - as was the case with Cryptopia and btc-e (WEX) assets.

Binance Casino has come under scrutiny from regulators in several jurisdictions around the world and in the United States. Trading company tokens, Binance also attracted the attention of German and British securities watchdogs back in April 2021. In September 2020, the Financial Action Task Force described Binance's change of jurisdiction as evidence that Binance plans to avoid regulation at all costs.

Financial Services Agency of Japan (FSA) has issued a warning to the legal entity Binance Holdings Limited (Cayman Islands) and its fictitious director Changpeng Zhao, because in reality Binance casino is owned and controlled by Guangying Chen (Heina Chen) apparently from China.

A Binance spokesperson stated as part of the news that the exchange currently does not conduct exchange operations in Japan and does not attract local users:

"We take a collaborative approach in dealing with regulators and take legal obligations seriously," the company stressed.
Thisis an utter lie and a deception to the public. Binance works finewith customers from Japan, China and eventhe U.S. -despite all sorts of regulatory bans. шаблоны для dle 11.2
26.06 10:42