China's two largest Internet services, Baidu and Weibo, began censoring search results to exclude cryptocurrency-related terms. Currently, searches for the keywords "Binance," "Huobi" and "OKEx" do not give any results.

This is the first known case of Baidu censoring on such grounds. The decrease in the output is gradual. For example, you can still find millions of results for the phrase "download Huobi app".

The social network Weibo, similar to Western Twitter, uses a similar approach. Although posts mentioning the three crypto exchanges are no longer found through the search function, they are available on the platform through direct links and are not yet deleted by it.

It is not known when exactly the changes took place. Chinese users started noticing them this afternoon. Shortly before that, China's State Council named bitcoin mining and trading as regulated financial risks. China's IT companies are accountable to the Cyberspace Administration, which sets requirements for the content they post and can oblige them to filter their output. In this case, the restrictions apply to the three largest cryptocurrency exchanges, which allow local traders to trade in a peer-to-peer market paired with the yuan. Other cryptocurrency-related keywords, such as "bitcoin" and "Ethereum," are still searchable.

At the same time, Chinese microblogging service Weibo blocked at least 12 accounts of cryptocurrency Influencers. The service accused the account holders of violating its guidelines as well as "relevant laws and regulations."

"An account I had used for years suddenly disappeared. However, I was humbled. Sooner or later that day had to come," one of the banned users under the pseudonym Professor Hash wrote in a new account.
According to journalist Colin Wu, media and social networks such as Weibo are run by the propaganda department of the CPC Central Committee. He noted that the official media is waging a "collective attack" on bitcoin, so the ban on cryptocurrency-related content is permanent. 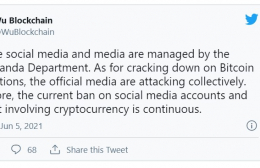 Wu estimated the total number of subscribers to the blocked accounts at 5 million. He stressed that their influence on Chinese retail investors could be as great as that of Ilon Musk: 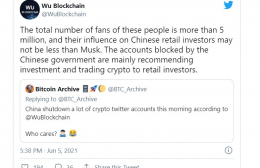 Speaking to The Guardian, Winston Ha, an adjunct professor at New York University School of Law, explained that this is another move by China to crack down on cryptocurrency trading. He expects China's Supreme Court will soon extend criminal laws to mining and speculation in digital assets:

"The government makes it clear that no Chinese version of Ilon Musk can exist in the country's cryptocurrency market," Ha added.
ChainsAudit also expects a judicial interpretation of cryptocurrency-related activity to emerge in China within three months. In particular, the activities of OTC brokers, exchanges, miners and ICO organizers will be equated to commercial crimes, the organization admitted. Wu also drew attention to the words of China Banking and Insurance Regulatory Commission Key Financial Institutions Supervisor Chen Weigang. He said the ban on mining and cryptocurrencies is permanent.

Weigang considers bitcoin a financial bubble and advocates a ban on cryptocurrency-related activities. According to Wu, he is not the head of the regulator and therefore can only express his personal opinion.

Recall that in March 2021 Weibo blocked the accounts of bitcoin exchanges Huobi, OKEx, Binance and MXC. The grounds were violations of community rules. The platform did not specify what exactly it was about.шаблоны для dle 11.2
13.06 15:02