Introduction: ScamBinance.com project continues to remind about the goals and objectives of the project - do not forget to send complaints to the regulators in all countries where the illegal and criminal casino Binance is present. We do it on a regular basis, including complaints to financial partners and financial regulators who provide fiat money transfers to the Binance underground casino.

Investigations in the United States

The Justice Department and the U.S. Internal Revenue Service are investigating Binance Holdings Ltd, implicating the world's largest cryptocurrency exchange in a U.S. effort to root out illegal and illegitimate activity that thrives in a vibrant but largely unregulated market.

As part of the inquiry, officials who probe money laundering and tax offenses have sought information from individuals with insight into Binance’s business, according to people with knowledge of the matter who asked not to be named because the probe is confidential. Led by Changpeng Zhao, a charismatic tech executive who relishes promoting tokens on Twitter and in media interviews, Binance has leap-frogged rivals since he co-founded it in 2017, the Binance exchange is still owned by Ms. Guangying Chen (Heina Chen).

The firm, like the industry it operates in, has succeeded largely outside the scope of government oversight. Binance is incorporated in the Cayman Islands and has an office in Singapore but says it lacks a single corporate headquarters. Chainalysis Inc., a blockchain forensics firm whose clients include U.S. federal agencies, concluded last year that among transactions that it examined, more funds tied to criminal activity flowed through Binance than any other crypto exchange.

“We take our legal obligations very seriously and engage with regulators and law enforcement in a collaborative fashion,” Binance spokeswoman Jessica Jung said in an emailed statement, while adding that the company doesn’t comment on specific matters or inquiries.
“We have worked hard to build a robust compliance program that incorporates anti-money laundering principles and tools used by financial institutions to detect and address suspicious activity.”
Spokespeople for the Justice Department and IRS declined to comment. The DOJ's Banking Industry Integrity Unit, which handles complex cases involving financial companies, is involved in the investigation, as is the Seattle District Attorney's Office. One source said that tax officials have been interested in Binance for months, with their interest covering both the exchange's customers and employees.

The Binance representatives said they take a collaborative approach in working with regulators around the world and "take legal obligations very seriously." 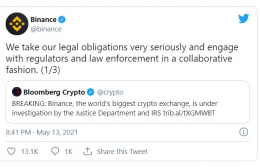 Binance CEO Changpeng Zhao called the publication's headline "bad". He said it was about how the trading platform cooperates with law enforcement "to fight bad players."

U.S. officials have expressed concerns that cryptocurrencies are being used to conceal illegal transactions, including theft and drug deals, and that Americans who’ve made windfalls betting on the market’s meteoric rise are evading taxes. Such worries have been a hindrance to the industry going mainstream, even as Wall Street increasingly embraces Bitcoin and other tokens amid a global investing frenzy.

While the Justice Department and IRS probe potential criminal violations, the specifics of what the agencies are examining couldn’t be determined, and not all inquiries lead to allegations of wrongdoing. The officials involved include prosecutors within the Justice Department’s bank integrity unit, which probes complex cases targeting financial firms, and investigators from the U.S. Attorney’s Office in Seattle. The scrutiny by IRS agents goes back months, with their questions signaling that they’re reviewing both the conduct of Binance’s customers and its employees, another person said.

The U.S. Commodity Futures Trading Commission has also been investigating Binance over whether it permitted Americans to make illegal trades, Bloomberg reported in March. In that case, authorities have been examining whether Binance let investors buy derivatives that are linked to digital tokens. U.S. residents are barred from purchasing such products unless the firms offering them are registered with the CFTC.

Zhao has said Binance closely follows U.S. rules, blocks Americans from its website, and uses advanced technology to analyze transactions for signs of money laundering and other illicit activity. Last year, the firm warned that U.S. residents would have their accounts frozen if they were found to be trading, crypto trade publications have reported. The inquiries follow a Chainalysis report on criminal transactions involving digital tokens. The firm tracked Bitcoin worth $2.8 billion that it suspects crooks moved on to trading platforms in 2019. Chainalysis determined that roughly 27%, or $756 million, wound up on Binance. Binance responded by saying it adheres to all anti-money laundering regulations in the jurisdictions in which it operates and works with partners like Chainalysis to improve its systems.

In the U.S., authorities have been cracking down on exchanges for flouting laws that are meant to prevent financial crimes, with officials citing the platforms use by terrorists and hackers. Tax violations have also been a priority, with the government recently winning a court order as it seeks to unmask U.S. clients of Kraken, a San Francisco-based exchange.

With the U.S. circling, Binance has stepped up its presence in Washington and retained a former Treasury Department official and top white-collar defense lawyers to represent it in legal cases and matters being reviewed by regulators. In March, the firm tapped former U.S. Senator Max Baucus, a Montana Democrat, to advise it on policy and government relations.

In September 2019, Binance partnered with a firm called BAM Trading Services Inc., which launched Binance.US to cater to American clients. Brian Brooks, who was a top banking regulator when he led the Office of the Comptroller of the Currency during the Trump administration, became chief executive officer of Binance.US this month.

Amid the hiring blitz, the company has popped up in U.S. cases tied to criminal activity. In February, two Florida men were charged with running an online fentanyl trafficking operation, with one of them accused of depositing the proceeds in a Binance account. That same month, the Justice Department sought the forfeiture of cryptocurrency worth $450,000 traced from ransomware attacks that hit several U.S. companies to a Binance account held by a 20-year-old Ukrainian national.

Along with the CFTC, the Justice Department is likely to examine steps that Binance has taken to keep U.S. residents off its exchange. One person familiar with Binance’s operations said that prior to the establishment of Binance.US, Americans were advised to use a virtual proxy network, or VPN, to disguise their locations when seeking to access the exchange.

Jung, the Binance spokeswoman, said the exchange has never encouraged U.S. residents to use VPNs to get around its rules, as doing so would be something “that has always been contrary to our company’s principles.” In January, Zhao tweeted that Binance’s security systems block Americans even if they try to connect through one of the networks.

“We have implemented strong access controls that have been tested via external audit and are under continuous review and evaluation by Binance to ensure that the appropriate restrictions are in place and are effective,” Jung said.
шаблоны для dle 11.2
14.05 19:54