It's difficult to assess the merits of the SEC's lawsuit against Ripple without having all of the information in general, but only in part from the lawsuit materials - we'll leave that to the court's discretion. Our history with Ripple (the XRP token) has been outlined earlier in Zero Liability: An 86,000 USDT Fault Binance Loss and the claims made in it were related to Binance's fraudulent activities. But if it turns out that the XRP token (will be recognized by the U.S. authorities and the SEC) is a security - the claims against Binance will be more. So, Binance is not only providing illegal financial services and engaging in illegal banking and forex activities, but it is also selling unregistered securities in the form of XRP tokens to retail investors. There are questions about the BNB token from the Binance exchange as well - in all likelihood, the BNB token is also unregistered securities. So, not only are the organizers of the Binance financial scam selling unregistered securities, but they created one.

It is interesting, when after the news about the SEC lawsuit - the XRP token fell mightily, the Binance exchange here too "robbed its traders and investors", you can read more in the article Continuation of BULL/BEAR scam: UP/DOWN tokens - Binance style casino.

Back to the SEC and Ripple news:

The US Securities and Exchange Commission (SEC) has filed a lawsuit against Ripple. The agency claims that the Californian blockchain company has been selling unregistered securities in the form of XRP tokens to retail investors for seven years. The SEC said that during this period Ripple raised $ 1.3 billion. The screenshot below shows that sales to retail investors have exceeded the same institutional indicator. 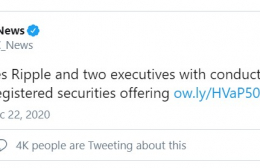 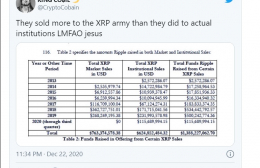 The defendants are also CEO Brad Garlinghouse and co-founder Chris Larsen, whom the agency calls "major security holders." According to the document, together, both sold tokens for $ 600 million. Garlinghouse, on the other hand, said in public that he was "playing long", hinting that he was holding his tokens, in fact selling them. Ripple paid for various services with tokens, including market making, according to the Commission. According to the authors of the document, the payment network based on the XRP (On-Demand Liquidity, ODL) token has attracted only 15 enterprises from the field of money transfers, among which there are no banks. The reason for this is supposedly high costs, which ODL is exactly designed to solve. The SEC found that the Californian company is subsidizing the use of this solution by customers, which makes cooperation attractive for the latter. For example, in the second quarter of this year, MoneyGram received $ 15 million from Ripple in the form of incentives: 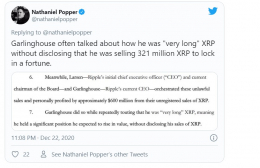 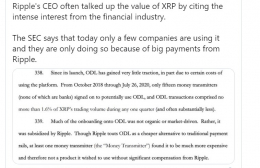 It follows that Ripple was actually paying customers to provide volume on ODL: 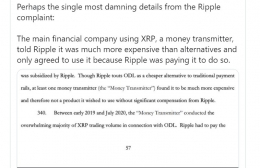 "Ripple's public strategy has been to do whatever is necessary to maximize the price of XRP during the period that will allow us to sell what we have."

The lawsuit will be heard in federal court in the Southern District of New York. The SEC accuses the defendants of violating the registration provision of the Securities Act (1933) and is seeking an injunction to stop further sales, return all funds collected with compensation and pay civil penalties.

The lawsuit is 71 pages long and includes over 400 counts that shed light on Ripple's activities. For example, the SEC writes that during the course of selling XRP for its own benefit, Garlinghouse repeatedly stated publicly that he was playing "very long" on XRP, meaning he "holds a significant amount of cryptocurrency that he expects to grow in value without disclosing the sales information."

The lawsuit begins with a summary of Ripple's activities, indicating that the company has been inextricably linked to cryptocurrency all along, despite deliberate attempts to distance itself from it in recent years. The SEC also states that Ripple has been advised by law firms that XRP could be considered an "investment contract," and therefore a security. They also warned that XRP likely could not be classified as "currencies," as Ripple itself wanted it to be. According to Palley, this is a valid point of the charge. The Kin startup had previously tried to argue that its Kin token was a currency, but lost the case to the SEC.

The document provides a summary of Ripple sales, where all amounts are counted to the penny. Notably, the total number of XRPs sold in the marketplace exceeds sales to institutional customers.

"In 2017 and 2018, Ripple entered into agreements with at least ten digital asset trading platforms, none of which are registered with the SEC in any form, giving them incentives to list and circulate XRP. Ripple paid these platforms a commission, usually in XRP, to allow them to buy and sell XRP on their systems, and sometimes provided incentives to achieve volume metrics."

"On April 11, 2016, Ripple instructed the market maker to buy XRP on the public market "with the goal of gradually reaching the $0.008 mark over two days" and with an "activity limit of 5% of daily trading volume."

"Garlinghouse had incentives to make efforts to increase the price and trading volume of XRP. Under the terms of the agreement, dated Dec. 13, 2016, Ripple was only required to pay him up to 500 million XRP if the volume-weighted average XRP price was "at least $0.02/XRP" for four consecutive weeks and weekly XRP trading volume was at least 1.4 billion."

The SEC also mentions that Ripple CTO (Chief Technical Officer) David Schwartz has publicly stated that the company "will do everything possible to maximize the XRP price, at least until we complete the sale of the XRP we have." The regulator accused Ripple of "creating an information vacuum" that allowed the cryptocurrency to be sold to market participants who did not have full knowledge of it.

In addition, one of the company's partners, who specializes in money transfer services, discovered that the XRP-based ODL payment system, positioned by Ripple as a cheaper alternative to traditional systems, was in practice significantly more expensive to use, and agreed to use it only if he was paid "significant compensation." According to lawyers, this is one of the most serious points of the charge that could undermine the company's arguments about the practical relevance of XRP.

So far, many cryptocurrency exchanges regulated by the government have suspended trading of XRP tokens. Binance Casino has only removed them from its homepage and continues to trade XRP tokens.

Ripple CEO Brad Garlinghouse commented on a lawsuit filed against his company by the U.S. Securities and Exchange Commission (SEC) on Tuesday. In a blog post, he calls the SEC's action a "broader attack on crypto" and warns that it could lead to a "snowball effect" that would affect other companies like Coinbase as well as the rest of the digital assets:

"Yes, the lawsuit identifies Ripple, Chris and I, but this is an attack on crypto more broadly. In this case, XRP is acting as a representative of every other altcoin. From here the snowball effect begins; this is not good news for any market maker, exchanges such as Coinbase, and so on. This sets a terrible precedent for the entire industry and any company dealing in digital assets."

Garlinhouse promised that Ripple will defend its position in court that XRP is not an "investment contract" because holders of the cryptocurrency are not affiliated with Ripple. He also noted that the market value of XRP does not correlate with Ripple's actions, unlike securities.


Tetragon Financial Group filed a lawsuit against Ripple. It led a $200 million Series C funding round in 2019, when the XRP issuer was valued at $10 billion.

Tetragon is demanding that Ripple redeem the preferred stock under an existing contract. The plaintiff is asking a court in Delaware to enjoin the defendant from using any liquid assets until redemption and to apply an expedited review process. Ripple has said that its contract with Tetragon includes a refund provided that XRP is recognized as a security in the United States, which has not yet happened.


A court in the Southern District of New York will hold a preliminary hearing on the Securities and Exchange Commission's (SEC) lawsuit against fintech company Ripple on Feb. 22, 2021.

The ruling states that the hearing will be in a conference call format. Both parties have until Feb. 15 to provide the factual and legal basis for the lawsuit, as well as settlement proposals.шаблоны для dle 11.2
26.01 17:37