Cryptocurrency casino (let's call everything by its own name - a casino and nothing more, even without a gambling license) Binance is once again planning to improve the mechanisms of its futures market to protect users from possible attacks. Apparently, from their own attacks, which are aimed at technical theft (write-off) of money and balances of dull users:

Binance Futures VP Aaron Gong announced on Twitter the Ethereum perpetual contract schedule. It shows how for a short time the price deviated sharply from the remaining levels of about $ 390 to $ 571.73 and $ 197.74, the price walked on the "leaky software" Binance perfectly, or once again the casino decided to collect cream from customer deposits: 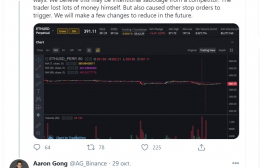 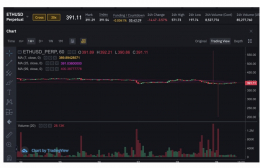 Binance is not to blame, of course, but when was Binance to blame? Never. Even with quasi BULL / BEAR tokens, no one is to blame, just users "did not understand the work of the casino." And whoever demanded compensation, even someone was given it, of course not in full, and some were simply thrown even with the signed official NDA Agreements . Is Binance to blame? We know nothing, have not heard anything, but in general "Who is here"?
“It was caused by one trader, in both cases,” Gong wrote. “We believe this could be intentional sabotage by a competitor. The trader itself lost a lot of money, but it also triggered the stop orders. We will make several changes to limit the impact of such actions in the future. "
And tales of the next improvements from the Binance technicians went:
First of all, the default stop order execution price will change from the last price to the marking price. “Many new users were unaware of the differences and used the latest price. Using the price tag will avoid this problem, ”Gong explained.
In addition, the exchange activates a price protection mechanism for all stop orders, including those already placed. As a result, such orders will not be executed if the last price and the price of the marking differ significantly. Binance also promises to increase the staff of market makers in order to attract more liquidity and provide depth to the order books, which will also reduce the risks of such situations recurring. Apparently, working with "fictitious and drawn" order books (fake liquidity on the stock exchange) - makes itself felt, and indirectly manifests itself in such cases.

Binance CEO Changpeng Zhao noticed the problem and promised that the proposed changes will have a tangible impact on users of the Binance Futures platform:

This change will have a significant impact on futures users. 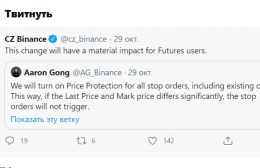 Such tricks occur frequently and densely. If you remember the trader's conflict with Binance for 86,000 USDT - there, too, a significant amount of capital was lost through the fault of Binance, Binance did not admit his guilt. Although, similar "failures" occurred both before the conflict and after it occur quite often, for example, on November 17, 2020 (just the other day), the price of bitcoin on Binance briefly jumped to $ 82,000: 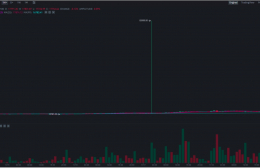 On the morning of November 17, the price of the first cryptocurrency on the Binance exchange immediately jumped by 390% - to $ 82,000. The bitcoin rate in a trading pair with the stablecoin TUSD rose from $ 16,626 to $ 82,000, after which it dropped to $ 16,635.
Exchange officials told ScamBinance that the jump was due to the creation of a market order for an illiquid pair. Binance has experienced similar price surges before. On October 28, 2020, the so-called "Sword of Darth Maul" appeared on the ETH / USD perpetual contracts chart, which activated trades at certain prices without going through the standard order approval procedures. The Ethereum price momentarily rose from $ 386 to $ 571, and then fell to $ 197: 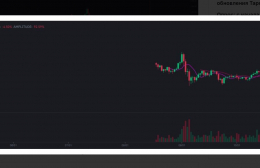 And in May - May 10, 2020, the price of bitcoin (BTC) unexpectedly fell from $ 9,500 to $ 8,100, at the same time, with this, some Binance traders declared that their winning shorts were closed. Forcibly closed the positions that brought profit to users, and Binance lost - just like that:
Deleverage??? BINANCE Close mу SHORT After i make 7 times mу investiment. What's going on!? Where is MY SHORT? THE BTC DROPPED TO 8000 WHO PAYS THE DIFFERENCE? maуbe @cz_binance even now the price is lower than what theу used for close mу position. @APompliano this is legal? pic.twitter.com/a04oZgFda2 — Athena Crуpto Bank (@AthenaBank) Maу 10, 2020
The closing of the shorts has adopted a systematic character, this process has been called the automatic deliberation. It's nice when they even came up with an interesting name for the banal theft of clients' money to hide the essence of the robbery. Binance Futures' problems and "potential losses" were again hung on customers:
When the trader's account balance becomes less than 0, the insurance fund is used to cover losses. However, in some extremely volatile market conditions, the Insurance Fund is unable to cope with losses, and it is necessary to reduce open positions to cover them," said the representative of Binance Futures.
In a series of tweets on September 16, 2019, Changpeng Zhao initially warned that the exchange's futures were being attacked by one of its own market makers. In this case, the attack turned out to be a false alarm due to a technical error on the side of the market marker. The object remains unknown, with Zhao only revealing that he was also a Bitcoin futures operator. Meanwhile, due to Binance's own customizations, the $ 300 drop did not liquidate the positions of other traders; only this random attacker lost funds: 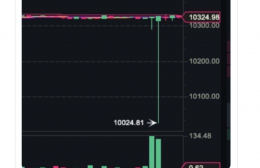