As a reminder, Binance recently reported on the next quarterly BNB burn. The exchange has withdrawn from circulation a record number of tokens - 3,477,388 BNB. The company said that they did it in accordance with the white paper, although the document itself disappeared from the part of the site where it was originally posted. Now it can only be found on the information page about BNB and then, the material is clearly after editing and making edits: 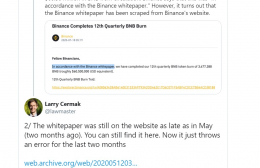 On May 12, the white paper still existed in the public domain at the link, but then at some point it was removed from there. An interesting fact is that the mechanism for burning tokens in different versions of the document was stated in different ways, the description of the mechanism for burning is different. The first claimed that Binance would channel 20% of its net income towards quarterly token buybacks. In the second, they will be destroyed based on the trading volume of the Binance scam exchange, without specifying the volume and timing of burning: 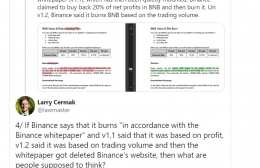 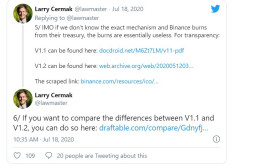 Users and the crypto community criticized Binance for an opaque (fraudulent) token burning mechanism and expressed the opinion that such behavior does not correspond to the spirit of the open source community, as well as a basically transparent business that raised money for the Binance exchange through ICO: 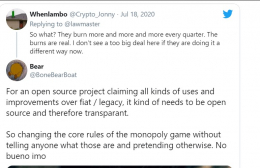 For an open source project claiming all kinds of uses and improvements over fiat / legacy, it kind of needs to be open source and therefore transparant.So changing the core rules of the monopoly game without telling anyone what those are and pretending otherwise. No bueno imo
On July 18, Changpeng Zhao tried to explain and reassure users with lies, spoke out - how the BNB tokenomics works. Analyst Larry Chermak decided to analyze the material provided by CZ and find inconsistencies in it, since it was not difficult: 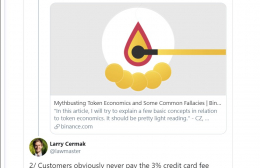 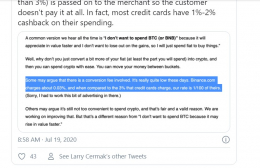 For example, Zhao compared the fees for converting fiat to cryptocurrencies on Binance versus credit card fees, concluding that the latter are 100 times higher. Chermak emphasized that credit card holders never pay 3% for settlements, and most cards also have a 1-2% cashback - that is, CZ at this moment exclusively deceives users and embellishes the usefulness of the BNB token. CZ stated that during the ICO, part of the tokens were assigned to team members, and the team can spend them if they want and whenever they want at their discretion. But in 2019, according to Chermak, CZ said that the team would send its share of tokens to destruction - thus either in 2019 CZ lied or is lying at the moment in 2020, or CZ is lying constantly and without stopping: 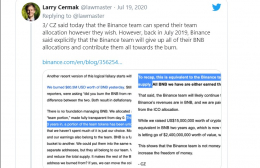 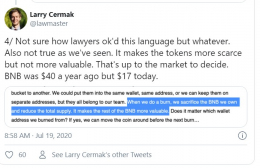 The head of Binance stressed that burning tokens allegedly makes them "more valuable." The wording in English can be interpreted as if he meant exactly the price (in our understanding - the cost), and not a rarity. CZ acknowledged that Binance made changes to the white paper, but they were "immaterial" and changes were made in secret from users, without notifications or messages about changes to the main document. He added that the quarterly burnings will continue as only the wording in the document has changed. 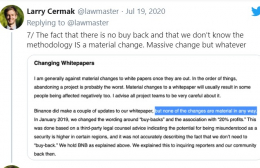 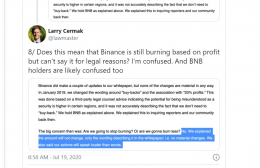