Binance, the leading exchange in terms of trading volume (there is every reason to believe that 90% of trading volumes are fictitious and wound by bots), made edits to the Binance Coin (BNB) white paper regarding the periodic burning of coins, the edits were made quietly and without wide publicity. So, from the document, the mention has disappeared that the site allocates 20% of the quarterly profit for the buyback of BNB and the subsequent destruction of tokens by burning, although the story around the BNB token itself is extremely entertaining and is partially described in the article BNB Tokenomics - Fraud and Illegal Security:

Changpeng Zhao stated that in fact, Binance does not buy back tokens on the market, but simply burns BNB (apparently from the reserves of CZ itself). In his opinion, the mention of the term "profit" in this part of the document brought BNB closer to the definition of a security, which the exchange seeks to avoid, because it is not for nothing that the SEC (USA) has already become interested in BNB and the activities of the underground exchange Binance. We advise you to compare the white paper of BNB as it was before and after the changes.

At the same time, a Binance spokesman emphasized that the exchange, as before, will burn tokens for an amount equivalent to 20% of the company's quarterly profit, but this information is no longer in the white paper and now the burning of these tokens is voluntary, and not mandatory as it was earlier.

Nevertheless, according to the legal expert of The Block, it is not enough just to remove any wording from the white paper or replace them for the regulatory analysis to show that the token is not a security - this is a deep and rather complicated process, especially considering the fact that in many ways BNB is a security, and Binance is a scam.

Previously, ScamBinance took a detailed look at the Binance Coin (BNB) token, the nature of this pseudo-token and the foundation on which Changpeng Zhao's empire of lies and deception is built. In particular, it was noted that the mechanism for burning tokens is not transparent, and the exchange can abandon this practice at any time (as was done in the white paper itself): 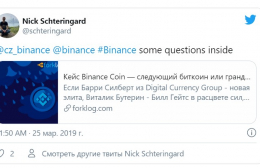