Puppet CoinMarketCap rates BNB as top DeFi currency, then delists it after backlash

The analytics website CoinMarketCap (CMC)—owned by the sham Binance exchange—put Binance Coin (BNB) at first place in the rating of top DeFi tokens by market capitalization. The decision came under fire from the media, which resulted in CMC de-listing the token without providing any explanation or feedback. The information came from Twitter of the Cryptonator1337 podcast host, Yannick Eckl, which aligns with our past reporting on CoinMarketCap losing any semblance of independence and becoming an artificial ratings machine for scam artists from Binance: 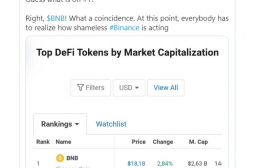 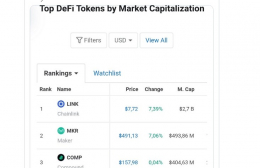 But that wasn't the end of the epically contradictory decisions of Binance conmen regarding the DeFi ratings. The Chainlink currency was 2nd on that list, and at the moment of his writing it is in the top spot. Many analysts don't even consider LINK to be a DeFi token, since it lacks proper utilitarian properties, but that fact doesn't seem to bother anyone. 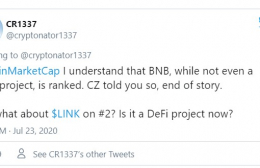 In their comments to Cointelegraph, CMC denied that they had accepted a bribe from the Chainlink team to list it in the DeFi section, which is most likely a lie, as befits the Binance puppet. According to CMC, the token meets all the necessary criteria and, therefore, is eligible for listing. On July 23rd it was reported that Chainlink oracles were added to the Binance Smart Chain test-network in order to improve usability. 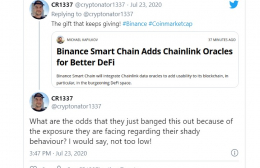 In his comments to ScamBinance.Com, Vadim Koleoshkin, a co-owner of Zerion and DeFiMarketCap, stated the following:

"We never added LINK, since it doesn't possess any explicit properties of a financial instrument, and it doesn't allow for protocol control. There are many projects utilizing the Chainlink technology, but it cannot be definitively called a DeFi token."
He added that BNB was not to be considered a DeFi token, for its utilitarian properties are ensured by the promise of a centralized organization, and not the smart contract code. The following is a top-10 list of cryptocurrencies (at the moment of this writing), as rated by DeFiMarketCap: 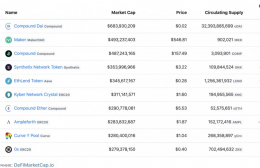 Binance claimed that they didn't possess the information on BNB being listed and de-listed in the DeFi section and referred us to CMC. In turn, CMC cited human error, as if the world and the cryptocurrency industry would be stupid enough to fall for such an obvious scam and blind enough to overlook these manipulations: