Binance manipulates the crypto market via the purchased CoinMarketCap

In the beginning of 2020, the illegal cryptocurrency exchange Binance confirmed the purchase of the market-leading analytical service CoinMarketCap. Naturally, crypto users understand why Binance bought CoinMarketCap - now it is a lever of influence on the "thin market" of cryptocurrencies and the ability to manipulate the characteristics of a false exchange. What Binance has been doing since its inception: 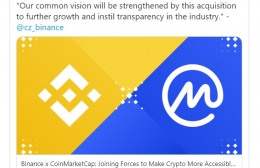 According to Binance CEO Changpeng Zhao, CoinMarketCap's vision, ethics, and corporate culture are in harmony with his company's values, as well as the service’s desire for transparency and user orientation. He is also confident that the acquisition of a leading service will contribute to the development of the crypto industry. In general, once again Changpain Zhao lied to the public about the true purpose of buying the service, but it is not a secret, because the rot of Binance almost immediately surfaced on the CoinMarketCap and will resurface repeatedly.

“After the acquisition, I think it will be hard for CoinMarketCap to stay neutral and independent, so we are now the largest, independent crypto data aggregator on the market”, - appreciated Ong's deal last week.
After the takeover of the competitor CoinmarketCap Binance Bitcoin Exchange only the service it heads will have the status of the largest and most independent data aggregator in the cryptocurrency market. This was stated in the interview My Two Gwei by the co-founder and CEO CoinGecko Bobby Ong. While CoinMarketCap relies on its own methods to ensure data integrity, CoinGecko uses what it calls a "Trust Score," which reflects the "reality of the data being reported. According to Bobby Ong, CoinGecko manages to maintain data integrity against the backdrop of new bitcoin exchanges that falsify trading volumes.

And immediately began to manipulate: Binance returned to the top of the Coinmarketcap rating

The analytical service CoinMarketCap changed the system of ranking of cryptocurrency exchanges, adding the metrics of web traffic. At the same time, the adjusted trading volume category was removed, which allowed Binance, which purchased the service last month, to return to the first place in the ranking: 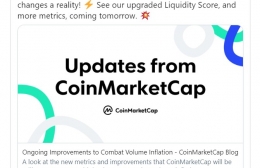 Traditionally, the main indicator in the rating of exchanges for a long time was the trading volume. This method of calculation is far from perfect: some trading platforms can twist volumes, creating the illusion of active user activity. In order to fight against fair trade volumes CoinMarketCap has introduced the Adjusted Volume metric. However, now it is not on the site, and Binance has returned to the first place in the rating with fictitious trading volumes.

Taking into account that the exchange has recently purchased the service, some users questioned the objectivity of the data. The head of Messari research company Ryan Selkis suggested using independent tools, adding: 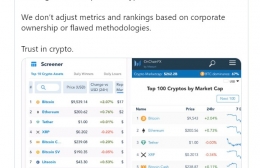 Struggle against competitors: CoinMarketCap has shifted BitMEX from the 3rd to 175th place in the ranking of the Crypto Exchange

Crypto-rating portal CoinMarketCap continues to experiment with the ratings of trading platforms after the acquisition of Binance. Currently, the popular BitMEX Crypto-derivative exchange is ranked 175th in the overall standings. At least on May 27 it was the third one:

Last week, CoinMarketCap announced another revision of its exchange ranking methodology. Previously, the ranking was carried out on the basis of web traffic, but the portal promised to expand the list of factors taken into account for a more complete assessment. With the latest changes in the algorithm, the rating of trading pairs of the cryptocurrency exchange on the spot market and the corresponding confidence rating were taken into account. A trading pair is rated based on trading volume, liquidity, and an estimated user base. Each pair is then tested with a Confidence Indicator, "which reflects CoinMarketCap's level of confidence in the accuracy of the exchange's trading volume data."

According to Skew's analytical platform, the trading volume of Bitcoin contracts on Binance Futures platform for the last day amounted to $2.63 billion, while on BitMEX - $2 billion. Although, everyone understands that the trading volume on Binance is artificially overestimated and absolutely does not correspond to the real one: 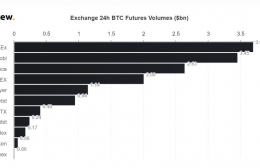 Binance, through the purchased CoinMarketCap service, is manipulating on all fronts. As a result, the largest derivatives exchange, BitMEX, was ranked 175th, while the leading options platform Deribit was ranked 179th.
The screenshot below shows that BitMEX is next to the little-known platforms BTCBOX and UPEX, and Deribit is next to Altcoin Trader and Sistemkoin: 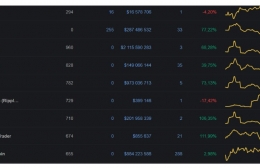 The little trick is failed: CoinMarketCap placed Binance Coin at the top of the DeFi rating, but removed it after criticism:

The analytical resource CoinMarketCap (CMC), which belongs to the Binance exchange, has placed Binance Coin (BNB) in the first place in the DeFi token rating. After criticism on social media, CMC removed the token from the list without giving any reason. This follows from the Twitter posts of the creator of the Cryptonator1337 podcast Yannick Ackle. Obviously, BNB is not a DeFi token, since its utilitarian properties are backed by the promise of a centralized organization, not a smart contract code - but Binance needs to be the first here too (by deception and lies). 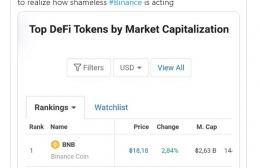 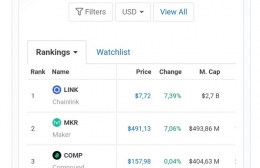 The controversial decisions on DeFi-rating did not end there. The second place after BNB was occupied by Chainlink project. At the time of writing, it is on the first line. Many observers do not consider LINK to be a DeFi-token as it has no utilitarian properties. In a comment by Cointelegraph, CMC denied that the Chainlink team paid a bribe for a listing in the DeFi section. According to them, the token fully meets the listing criteria.

Binance said they did not have information about BNB's listing/delisting in the DeFi section and suggested they contact CoinMarketCap, which ScamBinance did. The CoinMarketCap referred to the human factor, and what else can they say, taking into account that they have lost their independence and are completely dependent on illegal Binance:

"We corrected the mistake as soon as it was pointed at us."