Investigation by Coalexander.com: Trading Operations of the Binance Insurance Fund

A logical continuation of the Binance Insurance Fund investigation: Fraud with the May 19 futures platform shutdown (technical analysis and evidence). 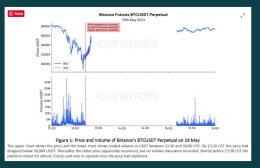 Comments on Replies from Binance’s Representative:
This is a continuation of my last blog about how the liquidation of so many long positions on 19 May were dealt with by the Binance insurance fund. I have been corresponding with a helpful Binance representative and some further facts can now be brought to light.


Q1: Why were so few liquidations reported on 19 May?

Binance changed the way they report liquidations on 23 April this year. Before then, they conveyed the same type of data as other exchanges, i.e. the total nominal of all positions liquidated per time-interval. But now they only report data for the very last liquidated position during that time interval. Binance’s representative said: “….liquidation orders streams do not push real-time order data anymore. Instead, they push snapshot order data at a maximum frequency of 1 order push per second … we push only the last liquidation order (i.e. not all liquidation orders). So the new snapshots show a subset of all orders, and during market volatility, a very small subset.”

Q2: How does the insurance fund operate?

The fund immediately takes over all bankrupt positions. Regarding 19 May, Binance’s representative said: “….the clients with 0 or less balance were assigned to the Insurance Fund, which cleared the client positions on the open market.”

Q3: Immediate clearance of so many long positions on 19 May would have compounded the losses already taken by the fund on positions with negative margin. How does the insurance fund’s clearance of large aggregate one-way positions avoid slippage? Does it (a) hold the positions indefinitely in the hope that prices will revert to levels at which they don’t realise a huge loss? Or (b) is there some time frame by which the insurance fund needs to close out positions?

“You are completely correct that during volatile market movements – especially down movements – closing large positions could result in slippage. Of the two options you listed, we do (a). Our insurance fund is well-capitalized and (my emphasis) Binance has intervened with its own capital as needed; we have no definite time frame on when we are forced to liquidate the positions held. That being said, we almost never hold any positions for an extended period of time.”

Q4: Okay, the Binance insurance fund traders may hold on to the positions the fund assumes through liquidations. Then why is the daily reported value of the fund so stable? Its mark to market value should be much more volatile.

The values of the fund shown on the website are not real-time (market to market) values. The open positions the fund holds are not revealed. It is only when the fund closes a position that the actual traded price is added to its value – along with any extra capital from Binance ‘as needed’. The Binance representative said: “We do not show mark to market value of the insurance fund on the website, only the cash value (realized PnL).”

Q5: Do you have a circuit-breaker rule like the NYSE and other major exchanges?

“No, we do not have a circuit-breaker rule.”

In light of these answers, let us reconsider what happened on 19 May. From the Q&A above, it is clear that Binance (trading through its insurance fund) took on some very large positions just as the market was crashing. We know from numerous reports in the press and social media that many of the long positions liquidated on 19 May were ‘little fish’ i.e. positions of value no more than about $10 million – and the majority of these were held by the retail traders attracted to Binance by its business model. Most of these little fish were small enough to have a maximum leverage of 100X (in fact, 125X on the inverse perpetuals) at that time. But with that very high leverage, positions can be liquidated super quickly – even on a tiny move of the order of 50 bps. As should be clear from the numerical examples in my last post, the maintenance margin of a 20X leveraged long position gets wiped out after a fall of approximately 2.5%. In fact, even well below the new 20X maximum leverage that Binance announced shortly after 19 May, most of the long positions would have been wiped out as soon as the price started to crash.

Therefore, on 19 May the Binance insurance fund traders took on a very large aggregate long position. Then they were faced the task of clearing this position on the open market. However, at the point when the insurance fund traders took over, the ‘big fish’ professional traders had only just begun to move the market. The BTCUSDT perpetual depicted above fell almost 38% at one stage and very soon after the prices became crazily volatile on zero recorded trading volume. Then the entire futures platform closed down.

The insurance fund traders were not compelled to close the liquidated positions they took over on 19 May. They may have closed anything between 0 and 100%. According to this  tweet from Francis Kim, the insurance fund closed positions worth more than $500 million on 19 May. But I have yet to verify these data. Whatever they did close would have realised a massive loss because all perpetuals fell 30% - 45% in a few minutes, so there would be huge slippage even on moderate positions. The slippage through the $500 million+ trades that Francis Kim claims were made in about 1 hour on 19 May, would have marked up enormous realised losses. These would have been covered by Binance’s own capital – we know this because the insurance fund data (realised PnL in their website) hardly moved at all.

Soon after 19 May, regulators in the UK and globally ebbed the flow of retail traders onboarding to Binance through its subsidiaries. This creates a ‘toxic flow’ situation – in other words, with the little fish disappearing, the insurance fund traders have been holding very large long positions against other professional traders like Alameda Research and Cumberland Capital.

To conclude, following mass liquidation events such as 18 April, 19 May, 25 July etc., Binance’s insurance fund trading may find their algorithms increasingly up against the algos run by much bigger and faster professional traders. Binance has grown so quickly that I have to say, I do question the expertise of the insurance fund trading bots opposite the likes of premier division players like Alameda or Cumberland.

Furthermore, Binance have no circuit-break rules, so the outage of the platform on 19 May was unintentional, Binance claim. But it still had exactly the same effect as a circuit break, i.e. trading only resumed once prices had stabilized, as the figure above shows. I conclude by noting that, while the Binance bots might not be able to match the likes of those of Alameda or Cumberland, trading on the home ground gives the home team one great advantage – the referee is theirs, and the referee has the right to stop the game.

The situation is similar to the story with tokens FTX BULL / BEAR (UP/DOWN), when Binance delisted FTX credit tokens after significant user losses, and a month later added their clones and said that users "do not understand", so they added the same tokens again for these same users. To put it crudely, Binance Casino is always right - even when it's not right, you can avoid it completely by leaving Binance Casino.шаблоны для dle 11.2
26.08 14:48