A lot of news is coming out about Binance and Singapore, we think it's just a rumor (we might be wrong). Binance has huge problems all over the world, including investigation by US Federal Government, in parallel to that, US Department of Justice and IRS are investigating Binance.

There is a lot of reasons for investigations and offences including criminal ones starting from servicing US citizens and residents (without business license), cynical deception of financial regulators in the USA through Tai Chi operation, servicing citizens and residents from risky countries bypassing regulators via "intermediary exchangers" with Binance Broker program, legal suits in the USA filed by traders and different funds/exchanges. There have been many official statements all over the world about Binance casino and its illegal activities in all countries.

What is left for Binance to do, especially considering the fact that their offshore home in the Cayman Islands and the Cayman Islands financial regulator (CIMA) is conducting its own investigation of Binance. Moreover, on the basis of those documents that are available, Binance Holdings Limited can be liquidated before October 29, 2021 (in 2 months). It remains, to create a new legend and a new haven, which will give Binance some more year to carry out illegal and criminal activities.

After Japan and Hong Kong, Binance rushed straight into the heart of the EU - to Malta, how much talk, plans, promises, fictitious offices and headquarters. Until all these tales were suppressed from the Maltese Financial Services Authority (MFSA). Binance as they like to do, ran away from Malta and remembered to defraud Maltese President George Vella's Malta Community Chest Foundation (MCCF) of $8-10 million. Apparently, this is how they wanted to get the loyalty of the Maltese government, when the financial regulator came forward, and they didn't get any loyalty, they decided not to pay the money to the foundation for people with cancer.

After Malta, Binance flew far away... Cayman Islands, where the Cayman Islands financial regulator (CIMA) did not long put up with "myths of crypto-fraudsters" and initiated investigations into Binance. At the moment, it became known that Binance Holdings Limited (Cayman Islands) is in liquidation status and apparently removed from the register.

Binance has 3 legal companies in Singapore:

According to some sources, it is at 1 WALLICH STREET #09-03 GUOCO TOWER SINGAPORE 078881, where BINANCE ASIA SERVICES PTE. LTD. has a physical office where the financial products development team works from. Whether management is located there is unknown. One of the companies, BINANCE PTE. LTD. (202119779G) was registered just recently two months ago, its purpose is unknown, it (yet) does not appear in public documents.

Binance is starting to act according to the old tried-and-true scheme - making it clear in every possible way that they will now operate legally in Singapore. It will be in Singapore (or there will be many of them all over the world, as Changpeng Zhao publicly lies), and it will be here where they will get licenses and operate legally. Exactly the same promises were made to China, Japan, Hong Kong, Malta, the Cayman Islands... promises in 4 years, still promises. The Monetary Authority of Singapore (MAS) is monitoring Binance, and there is no talk of any operating license at this time.

But Binance, already supports these rumors and in our opinion, is the source of such rumors as, Binance plans to attract investments from Singapore government funds at a valuation of $200 billion: 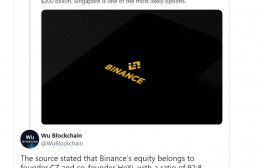 According to Wu's interlocutor, Binance is owned by founder and head Changpeng Zhao and co-founder He Yi by a ratio of 92:8. We believe that the true beneficiary of the casino Binance, not Hie Yee, but Mrs. Guangying Chen (Heina Chen) and the very fact that in the public are beginning to appear data on who allegedly owns Binance (according to unknown sources), the true owners are trying to hide, as our information about Guangying Chen (Heina Chen) slowly come out.

Wu stressed that, together with the rejected investment from Sequoia Capital Zhao showed Binance's interest not in external financing, but only in venture capital to cooperate with regulators and obtain licenses. According to the reporter, Vertex Ventures, part of Singapore's Temasek fund, has invested in Binance Singapore and may support Binance Global in the future.

"Coinbase's [crypto-exchange] profit in the first quarter [of 2021] was about $800 million at a current market value of $54.2 billion. Binance's profit is about four times that of Coinbase, so the valuation is $200 billion," the journalist wrote. 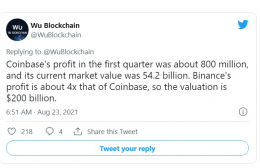 The journalist, forgot to add that Coinbase is a regulated and licensed exchange in the United States, to which there are no legal claims. Coinbase is listed on the U.S. stock market, pays taxes and has a strong lobby group in the government. It fully operates in the legal field, and does not run around the world in order to shelter somewhere for 6-12 months and then run away. So what is offshore casino Binance? And what comparison can there be with Coinbase at all, if Coinbase even refused to be in the Association of American Cryptocompanies along with Binance.US (not to mention Binance.com), which is under all possible investigations and inquiries in the USA.


Our opinion: Binance is following the old script, trying to appease its audience and let dust in its eyes once again. Trying to gain a foothold in Singapore, but not changing the profile of their criminal and illegal business. All the public "dancing", like the announcement of the appointment of the former head of the Abu Dhabi Financial Supervision Authority Richard Tan as the director of its Singapore unit is just another public splash, as it was with Brian Brokso in the USA, creating a false image and appearance of activity, in fact, nothing has changed in Binance. After a while, Binance will run away from Singapore with a wicked tail. 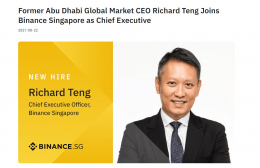