The BitMEX exchange agreed to pay $100 million as part of a settlement from U.S. authorities for its financial crimes from 2014 to 2020. That sounds great, you might say. Of course there were violations, FinCEN and the U.S. Commodity Futures Trading Commission (CFTC) investigated, and settled the fine. Everyone is happy, everyone is happy, BitMEX can now legally operate in the market, violate the law for another 10 years, and in 10 years it will pay $100 million and do it all over again. Is $100 million a lot or a little for a large cryptocurrency exchange? It's pennies. But, the most interesting thing is happening elsewhere.

According to numerous facts and evidence, Bybit.com exchange was organized by the founders of Bitmex.com, certainly without any legal trace or relationship directly to Bitmex.com. Bybit.com is positioned as an independent exchange, but it appeared at the time Bitmex.com's problems began, uses similar software, and more interestingly violates all the same laws that Bitmex.com violated, for which it received a $100 million fine. Roughly speaking, the Bitmex.com exchange backed itself up and created its own clone, Bybit.com - which of course has full control, and is fully responsible for the exchange's policies at the moment. It makes sense for the financial regulators FinCEN and CFTC to deal not only with Bitmex.com, but also with Bybit.com and consider in their investigations that the management of the fined exchange has not learned its lesson, but is knowingly committing financial crimes, using various tricks, knowingly committing crimes.

From about 2014 through 2020, BitMEX allowed customers to access its platform and trade derivatives without proper customer verification - collecting only an email address and not verifying customer identity. Despite BitMEX's public statement that its platform did not do business with U.S. persons, FinCEN found that BitMEX failed to implement appropriate policies, procedures, and internal controls to verify customers who use a virtual private network to access the trading platform and circumvent Internet protocol monitoring. In some instances, BitMEX's senior management altered customer information in the United States to conceal a customer's true location.
The Bybit.com exchange is doing exactly the same thing, without exception. The criminal business is so lucrative that BitMEX is willing to pay a fine, create a "clone of their business" and continue business as usual. There is a demand for such services, which means BitMEX-Bybit is supplying and providing criminal services. This peculiarity has been noticed for a long time and is discussed publicly in Bitcointalk.org forum: Bybit and FTX are clones of BitMEX and Binance and on Twiiter:

Major major accusations came down on the BitMEX exchange after 2018, and that's the year the Bybit exchange was born. It was essentially a complete clone of BitMEX. Judge for yourself, the lack of KYC (as it once was on Bitmex), although KYC is now being implemented on ByBit, it is still possible to trade without it, unlike the same BitMEX. Alternative? Yes. Also a similar trading concept. Contracts only, no spot and no fiat. This was also the case on Bybit until spot trading was added there until recently. An alternative? Absolutely. The Bybit exchange appeared suddenly, relatively recently, and almost immediately became a billion-dollar (by volume) giant with similar functionality and trading concept to BitMEX. It's possible that the exchange was originally supported and promoted thanks to its big brother, BitMEX.
So, we can assume that exchanges create clones for themselves (in a certain sense of the word) to hedge reputational risks. At the moment, the reputation of BitMEX and Binance suffers because of repeated accusations of certain frauds, while their alternatives are clean (practically) and there are no serious accusations against them. These exchanges are a kind of alternative airfield in the world of exchange business.

If you translate it into the language of the forum, they are alternative accounts, which are pumped almost simultaneously, to diversify the possible risks, so that the business can continue, even if the main account is closed, banned or even loses its reputation. Since it will be very difficult to start from the beginning and it will be a loss of possible profits. And here is a ready alternative, without damage to the business, and if the main site will cease to exist at all or will be constantly under attack by regulators or lawsuits, the business continued and will continue, just through another platform, which by then the massive problems will have been heard by all and pumped as much as possible.

I mentioned 2 known possible cases of such alternatives, but probably every major exchange has such clone alternatives. Because no one wants to lose their business in the world of crypto trading, and exchanges won't last long in such a market. Leaders change all the time. That's why you need a safety net in this business and you need to invest in alternative scenarios. What do you think about it? The connection between these projects, or rather Binance's creation of its clone called FTX, is so obvious that one wonders why nobody hides the connection, and only weak attempts (see article Opinion: FTX bought its stake from Binance) are made public. The connection between them can be traced, even through the USDT issuer Tether, through common fraud tricks - for example, with FTX tokens BULL / BEAR (UP/DOWN), fraud with financial instruments (futures), the concept of criminal cartel Teher-Binance-FTX, can be reduced - as so Binance and FTX is one criminal organization. They even have the same decisions, for example, to reduce leverage x20 on Binance and FTX, such coincidences are extremely high.

FTX is the younger brother of Binance. The exchange is also positioned as a multifunctional trading platform with its own exchange options, OTC, futures, spot trades, various tokens, a wide range of trading pairs, fiat and more. Moreover, we often see exchanges collaborating with each other, such as the famous BEAR\BULL leverage tokens that are pumped from FTX to Binance and vice versa. This is the same billion-dollar giant that emerged relatively recently, in 2019, and has already grown to such proportions. How can such young exchanges become industry leaders in 2-3 years, if not without the support of their big brothers?
Did I state that FTX is owned by CZ? It does not matter who is the manager of a particular exchange. It is clear that in their own interests they may intentionally split their business so that if something happens, the trail from one exchange to the other is not stretched by regulatory and litigation issues.
These are such little things. The fact that these exchanges can be set up as an alternate airfield to retain business in the event of any reputational or legal action does not mean that these exchanges have to fully mirror each other's full functionality.
Statistics 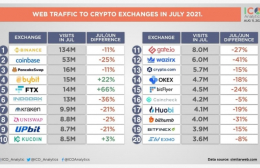 It is clearly seen that the casino Binance is losing its audience (due to pressure from regulators around the world), the exchange FTX this market share gains. It is important to note that FTX casino is not much different from Binance in terms of business model, regulation, licenses, scams - they carry out the same scams against private capital, traders and financial regulators. Binance casino for 4 years of its existence has already become a significant player and its financial crimes are obvious to everyone - there is pressure from regulators, but the clone exchange FTX is fresh and new and its reputation is gradually deteriorating, but there is a time reserve of 2-3 years, during which you can steal half of the world, as it was and is doing in Binance. At the same time FTX attracts billions/blillions of dollars from private investors and funds in the USA as a "white player" which is also an income source.

Binance is losing EU market and South Korea, we're pretty sure FTX will get a share there, though like Binance they don't have any rights to serve and provide services to residents of those regions - no licenses.

And while that is happening, FTX suddenly saw a 60% increase in traffic, the share of futures trading increased by 50%, BTC liquidity tripled. It seems that they gave up on Binance in terms of development and it's cheaper to close its branches than to try to fix something. Let's redirect all forces to more promising direction of crypto business, which is not yet clogged with regulatory restrictions - FTX clone.
шаблоны для dle 11.2
15.08 09:16