Tether - what can we say about it? Of course, this project is not about Tether and it is not for us to drop information about this "counterfeit money machine" and "tales about complete security of every USDT), there is enough information in the Internet. Absolutely "black" project, which should certainly be dealt with by law enforcement agencies, international organizations and the U.S. government, China. Taking into account, the news from the US DOJ: Tether is facing a criminal case for bank fraud in the US - maybe they will be able to zero in on this "fake money" and start (just start) to put the crypto market in order.

Tether's past problems with the New York prosecutor's office have ended with a ridiculous $18 million fine, and in our opinion, the resolution of the problem in this way was lobbied by something or other. Under suspicion is CoinBase, which after solving the problems - accepted USDT token on board its exchange. Is it a coincidence that the entire cryptocurrency market has been chasing upwards for over a year by wildly printing USDT to a peak, and the peak happened on the day IPO CoinBase came out. There are too many coincidences in the cryptocurrency world, especially if it is related to the Tether printing press.

No doubt that crypto exchanges (or almost all of them) are tied to USDT (from Tether) in one way or another, and informally at the management level have contacts with Tether. It is easy to manipulate the market when everyone is connected and everyone understands exactly what games are being played, and certainly - everyone understands exactly what Tether and its "real dollar collateral" are.

When you look through the Binance whitepaper, you find a lot of interesting things. It is a pity that the most important person, Binance owner Guangying Chen (Heina Chen) is not there, but that is not what we are talking about now. I'm talking about Mr. Zhao Dong (Zhao Dong), which is present in the whitepaper Binance: 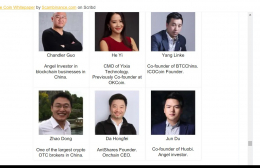 There is a lot of information on the Internet about this "crypto-billionaire" - the owner of RenrenBit.com. The fact that he was an investor in Binance at the startup stage is a public and well-known thing.


The CEO of cryptocurrency company RenrenBit, billionaire Zhao Dong, has been detained in China.
This happened back on June 24, initially the information appeared as rumors, but now it has been confirmed by the local publication ChainNews. The probable reason for the detention is said to be suspicion of concealing the proceeds of crime.
RenrenBit marketing director Zi Chen stressed that the company continues to operate as standard. The detention is related to Zhao Dong's outside business and does not affect RenrenBit's core businesses. According to BlockBeats, the billionaire returned to China from Tokyo in June and agreed to cooperate with investigators when he learned of an ongoing investigation into money laundering through over-the-counter cryptocurrency platforms.
Authorities allegedly linked Mr. Dun to an illegal platform that was involved in laundering at least $7 billion. The billionaire is accused of setting up schemes in which participants provided their bank accounts and payment system accounts for additional fees. These addresses were subsequently used to obfuscate financial transactions for money laundering purposes.
RenrenBit serves over-the-counter trading in the Chinese market. Zhao Dong is a well-known representative of China's crypto industry. He is also an investor in Bitfinex crypto exchange and the founder of DFund investment company.
Zhao Dong is currently in a Chinese prison for fraud, financial crimes, and money laundering, but interesting connections to Zhao Dong can be found as follows:

Zhao Dong: I have seen with my own eyes the balance of the Tether bank account - was reported Feb. 6, 2018
Zhao Dong, a prominent Chinese investor and Bitfinex shareholder, claims to have seen with his own eyes the Tether and Bitfinex bank account balance during a recent meeting with Bitfinex CFO Giancarlo Devasini.
Bitcoin.com writes this, citing a blog post by Dong. "Lao Mao (head of Big.one) and I just saw the Tether and Bitfinex dollar account in Giancarlo's office. There is 1.8x billion USD in the Tether account and 1.1 billion USD in the Bitfinex account. That's a total of about USD 3 billion, which is more than the USDT number in circulation. This refutes all the rumors about USDT," Dong writes.
For his part, Devasini said during an interview with Mao that "the Bitfinex team has about 50 people" and "the Tether team is not working for money," adding, "As early bitcoin investors, the team is endowed with a sense of duty and responsibility." He also noted that the company does not intend to disclose all the details of its relationships with banks, ostensibly in response to pressure from the U.S. banking industry, which has hindered Tether's activities in every way possible.
"Tether can no longer be limited to the U.S. dollar," he said, suggesting the euro, Japanese yen and other fiat currencies as alternatives. Tether had previously reported on the issuance of a EURT token pegged to the euro. From the interview, Mao concluded that "we can trust Tether and USDT." Mao's sentiment about Tether tokens has changed markedly recently. Last November, he urged cryptocurrency exchanges not to integrate pairs with USDT.
"We commissioned our partner at Goldman Sachs to do a USDT study," he writes, adding that the results of the study were "shocking." "Bitfinex, Tether's largest shareholder, likely has access to deposits in Tether at any time," the report says. In addition, the report's authors criticized both companies for their lack of transparency in their relationships with banks, and specifically Tether for presenting audits by auditor Friedman LLP as meaningful audits, even though they were not.
The direct link to the Tether fraud is clear. Tether's collateral is a fairy tale, it was a fairy tale in 2021 and in 2018. But Zhao Dong (Zhao Dong) publicly subscribed to Tether's collateral, which in fact Tether does not and did not have.

We found Zhao Dong's abandoned Twitter - the man is in jail; he doesn't care about social media. Where, the connection with FTX exchange (Sam Bankman-Fried and his cryptocurrency fund Alameda Research) before his arrest is quite clear. Where, Zhao Dong (Zhao Dong) publicly calls for the use of FTX as an exchange, promoting the creator, his fund and the unregulated FTX exchange in every possible way: 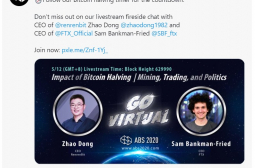 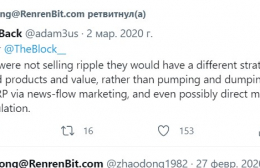 We remind you that FTX allegedly bought its stake from Binance as soon as Binance started experiencing problems. Although, FTX activities are no better than Binance casino. These are the kinds of cartels present in the market, an artificial cryptocurrency market that is manipulated and managed by a number of players.шаблоны для dle 11.2
31.07 21:16