Bitcoin's end: Tether, Binance and the white swans that could bring it all down

Source of the article Bitcoin's end: Tether, Binance and the white swans that could bring it all down:

Since the 2008 financial crisis, calling something a “black swan” has become the financial pseudo-intellectual’s favorite platitude - as Taleb himself has complained when people used that to refer to the pandemic.

The thing about a black swan is that you never see it coming. Risks in plain daylight are white swans: public health officials had warned about influenza-like pandemics for years, and we’ve had dozens of such episodes in history. Hence Taleb’s complaint.

Everyone is looking for black swans in crypto, but I’m not here to speculate on those. Crypto has a few white swans out there and recent news suggests they’re more risky than anticipated. Last week, I explained how USDT is a key part of arbitrage, market making, and speculative margin trading that creates huge “free money” opportunities. That free money forms a big part of the positive feedback loop for crypto. USDT, it turns out, is completely intertwined with another entity: Binance. And the headlines suggest Binance is in trouble.

Crypto is highly dependent on these two, and it turns out they’re highly related. The failure of one could topple the other and crash the entire market. So how might that happen?

There are $62B tokens for USDT in circulation, much of which exists to fuel the massive casino that is the perpetual futures market on Binance. These complex derivatives markets, which are illegal to trade in the US, run in the tens of billions and help drive up the price of Bitcoin by generating the basis trade.

For Binance to allow traders to make such crazy bets, it needs collateral to make sure if traders get wiped out, Binance doesn’t go bankrupt. That collateral is now an eye-popping $17B, having grown from $3B in February and $10B in May: 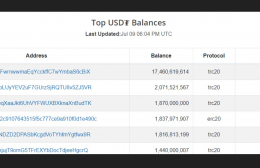 But for that market to work, Binance needs USDT. And getting fresh USDT is a problem now that the exchange, which has always been known for its relaxed approach to following the laws, is under heavy scrutiny from the US Department of Justice and IRS: so much so that their only US dollar provider, Silvergate Bank, recently terminated their relationship, suggesting major concerns about the legality of some of Binance’s activities. This means users can no longer transfer US dollars from their bank to Binance, which were likely often used to fund purchases of USDT.

Since that shutdown, the linkages between Binance, USDT, and the basis trade are now clearer than ever. In the last month, the issuance of USDT has completely stopped: 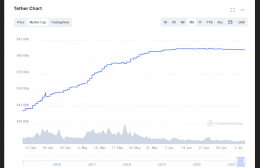 Likewise, futures trading has fallen significantly. This confirms that most of the USDT demand likely came from leveraged traders who needed more and more chips for the casino. Meanwhile, the basis trade has completely disappeared at the same time.

Which is the chicken and which is the egg? Did the massive losses in Bitcoin kill all the craziest players and end the free money bonanza, or did Binance’s banking troubles choke off the supply of dollars, ending the game for everyone? Either way, the link between futures, USDT, and the funds flooding the crypto world chasing free money appears to be broken for now. 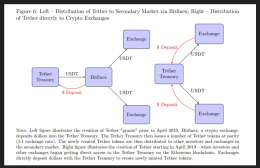 Right now Tether is Binance’s $17B problem. At this point, Binance is holding so much Tether the exchange is far more dependent on USDT’s peg staying stable than it is on any of its banking relationships. If that peg were to break, Binance would likely see capital flight on a level that would wreak untold havoc in the crypto markets.

But what about the other direction? We know that a USDT collapse would hurt Binance. What about Binance’s troubles?

Regulators have been increasing the pace of their enforcements. In other words, they are getting pissed, and the BitMex founders going to jail is a good example of what might await.

Binance has been doing all it can to avoid scrutiny, and you have to award points for creativity. The exchange was based in Malta, until Malta decided Binance had “no license” to operate there, and that Malta did not have jurisdiction to regulate them. As a result, CZ began to claim that Binance “doesn’t have” a headquarters.

Wonder why? Perhaps to avoid falling under anyone’s direct jurisdiction, or to avoid a paper trail?

CZ went on to only reply that he is based in “Asia”. Given what China did to Jack Ma recently, we can empathize with a desire to stay hidden, particularly when unregulated exchanges are a key rail for evading China’s strict capital controls. Any surprise that the CFO quit last month?

Here’s what could trigger a cascade that could bring the exchange down and much of crypto with it: the DOJ and IRS crack down on Binance, either by filing charges against CZ or pushing Biden and Congress to give them the death penalty: full on sanctions. This would lock them out of the global financial system, cause withdrawals to skyrocket, and eventually drive them to redeem that $17B of USDT they are sitting on.

And what will happen to Tether if they need to suddenly sell or redeem those billions? We have no way of knowing. Even if fully collateralized, Tether would need to sell billions in commercial paper on short notice. And in the worst case, the peg would break, wreaking absolute havoc and crushing crypto prices.

This is not an unlikely scenario. Maybe I’m being dramatic. It’s possible that regulators will move as slow as they have been all along - with one country at a time unplugging Binance from its banking system until the exchange eventually shrinks down to be less of a systemic risk than it is.

Everything around Binance and Tether is murky, even as these entities two dominate the crypto world. Tether redemptions are accelerating, and Binance is in trouble, but why some of these things are happening is guesswork. And what happens if something happens to one of those two? We’re entering some uncharted territory. But if things get weird, don’t say no one saw it coming.шаблоны для dle 11.2
22.07 13:52