FTX Casino, neither better nor worse than the main Binance casino, has publicly broken U.S. law, why? They do it, just like Binance does it all the time. 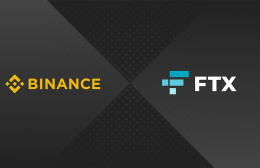 
On May 8, 2021, a public event happened, Barry Silbert publicly wrote on his Twitter that DOGE cryptocurrency is fun, that it's time to change it to BTC, and that he opens a short on DOGE at FTX: 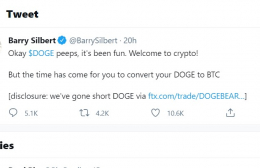 That would be OK, except for one thing: Barry Silbert is a US citizen and resident (CEO of Digital Currency Group (parent company of #Grayscale)), FTX has no right to serve US citizens, which is made clear in its rules, or in the "basement of the website":

FTX Services and FTX Token (FTT) are not available in the United States or other prohibited jurisdictions. 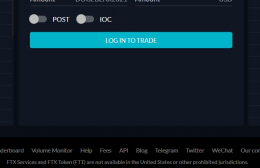 Barry Silbert (U.S. citizen and resident) has publicly stated on Twitter that he is shorting (trading) on the exchange FTX - which has no rights to serve U.S. citizens and residents. And which, by law, has no right to do so. FTX casino reacts perfectly to the news and continues to serve Americans and spit on U.S. laws. At the moment, a complaint is forming for filing with the Commodity Futures Trading Commission (CFTC). Illegal casino Binance and its "partners" continue to engage in financial criminality and outright violation of financial laws.


Binance and FTX (a long-standing friendship of con artists)

Do not forget that in late December 2019, our favorite banana exchange Binance announced a strategic investment in the cryptocurrency derivatives exchange FTX, official information available at the link Binance Announces Strategic Investment in FTX and Lists FTX Token (FTT) 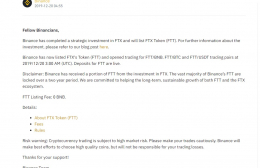 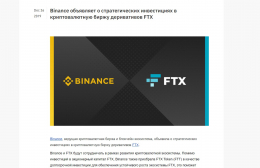 In addition to its equity investment in FTX, Binance also acquired long positions in the platform's own token, FTT. According to the statement, the exchange blocked most of the FTT received for two years.
The coin has been added to Binance's listing and is traded in pairs with bitcoin, BNB and USDT.
As part of the strategic partnership, FTX is expected to help develop institutional products for the Binance ecosystem, including spot and over-the-counter (OTC) trading. The derivatives platform will continue to operate as an independent entity. The amount of Binance's investment was not disclosed.
Under the terms of the deal, Binance acquired FTX shares and opened long positions on its token FTT.

That is, the FTX exchange in one part or another belongs to Binanse. We have repeatedly written that Binance still serves the U.S. residents directly or through "controlled partners" (program Binance Broker: How Binance through Cryptorg serves U.S. citizens). As in principle, it serves citizens of other countries - where Binance activities are outside the law, but it is outside the law in any country - because, Binance does not have any license for activities, but the services represent both banking and brokerage, and financial services.

When Binance was cheated and told that they were operating in Malta, the regulator's response came out - Malta Financial Services Authority (MFSA): Binance has no license to operate in the country. Same thing happened in China - China: Binance exchange continues to operate illegally in China - where Binance (represented by CZ and Guangying Chen) quickly escaped to Japan (this was before the legend with Malta). In Japan, crypto casino Binance or ... just an illegal casino was quickly put in place - the Financial Services Agency of Japan (FSA) and the Hong Kong Securities and Futures Commission (SFC) require Binance to obtain a license. After all these escapes, Binance began to hide its legal structure from regulators and users, unknown where, to work on behalf of an offshore company Binance Holdings Limited (Cayman Islands).

In the US, meanwhile, Binance has violated and continues to violate the law, an example of Forbes' investigation: Binance profits from US investors by defrauding regulators (Operation Tai Chi). After which, for appearances only, Binance started blocking US users. And the CFTC opened an investigation against Binance because of the possible sale of derivatives to Americans - in principle, a reasonable action by the financial regulator.

There was already a big scandal when Binance and FTX cheated thousands of traders with their tokens, you can read the material at the link - Binance Fraud with FTX tokens BULL / BEAR. The most interesting thing happened later, namely Binance delisted FTX credit tokens after significant losses of users, and a month later added their clones - the casino does not stop its work, it just changes the name, the principles of fraud remain the same. Who forgot, it was as part of the FTX token claim settlement that Binance casino cheated users once again - Fraud with a signed NDA agreement. Just a fantastic thriller with elements of detective, where Deception in the main role and in all secondary roles too, there is nothing but deception and fraud at Binance, was not and most likely will not be. Any doubts? We advise to read the fresh material Practice of blocking accounts, inaccessibility of technical support, theft of assets on balances of users in the USA (#BinanceHell).шаблоны для dle 11.2
09.05 18:56