Apparently, this is my last article in the NDA and Binance Agreement series, and since the very beginning I have said pretty much all. We started with Communicating with the Binance Support Center, continued with Communication with lawyer Anatoly Rybachok (Yuskutum Consulting LLC, Yuskutum LLC, Kyiv, Ukraine), and hoped that the issue would be solved when we signed the NDA Agreement (even despite the fact that the NDA Agreement itself is extremely suspicious and not professional — apparently, because such agreements are made by the world's best lawyers from Ukraine)... But Binance won’t give up so easily — they simply violated the NDA Agreement and did not give a damn about it; they did not pay anyone anything.

For over a month I have been trying to figure out the legal details of Binance — as well as where one can send a pre-trial claim or express their indignation. Of course, I’ve read the articles, such as How Binance Exchange Hides the Legal Structure from Regulators and Users, Binance Won’t Answer Questions About Its Legal and Physical Location, and Head of the Binance Exchange Won’t Disclose the Location of Its Headquarters.

I thought that it would be nice if they specify at least some company — even if it was an offshore in the Cayman Islands, but it seems that the Support Center works on template responses, and they cannot say anything except pre-prepared templates. Most often, the stereotyped answers are so stupid that you can’t but be amazed. Naturally, I could not get any names of companies and firms, as well as legal names. None at all. I can hereby confirm that Binance insolently hides literally any legal information about itself: legal entity, registration number, registration jurisdiction, office address (at least the legal one), actual office address (this is total nonsense for Binance). Binance operates illegally around the world and provides financial services of poor technical quality (deliberately engaging in manipulation and scam).

I’ve always wondered how Binance reacts to negativity from users not via its Twitter, but directly — via other users. So I decided to find out directly. In a close circle of my acquaintances, I turned for help to a person who trades on Binance. This person’s trading volume exceeded 114 BTC, and the capital he had for trading on Binance was $90,000 — a full-fledged user with quite decent capital and trade turnover. I gave him links to my story and asked him to contact the Support Center and find out — what’s the reason for such a treatment of the trader, why the NDA Agreement was signed, and why it was not fulfilled. The main question was why they ignored the NDA Agreement — it’s like for them, it did not exist at all (in tickets, they neither deny, nor confirm its existence — they simply ignore it altogether). Let’s see how that turned out: 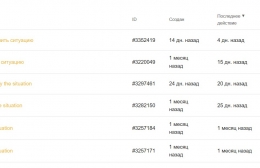 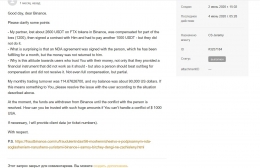 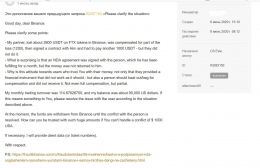 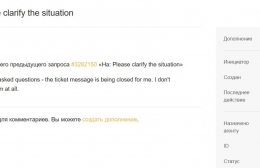 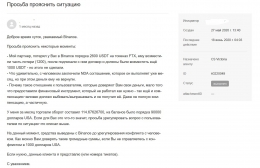 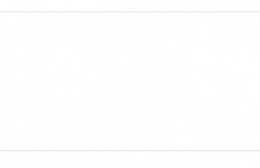 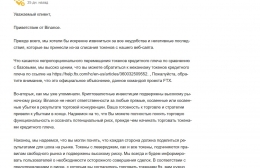 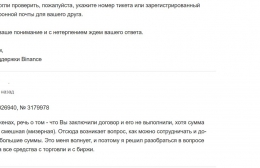 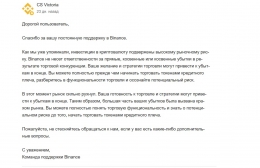 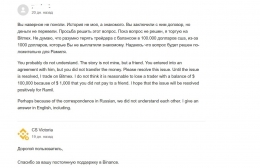 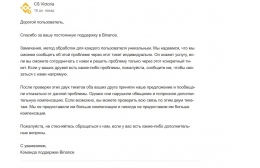 The results of the appeal are as follows:

1) A total of six appeals were created — five of which were just closed without any reply. Note that the things stand like that with the user who has not previously filed any claims and has not created any tickets at all. Don't forget that this same user has a trading volume of 114 BTC and an account balance of around $90,000. And he is... already being ignored.

2) In one of those six appeals, there was a long-awaited conversation. I guess they’ve grown tired of just closing those tickets — the result’s not bad at all, I think. A conversation with the largest crypto-exchange in the Universe.

3) The Support does not get to the bottom of the requests (and it does not matter in what language a ticket was created — in Russian or English). The ticket concerns “a partner and a friend,” so they reply as if it’s you who has a claim. In the ticket, you provide the number of the appeal of your “partner and friend,” and they once again ask you the number of the appeal, although it has been already provided. When you ask why the NDA Agreement has not been fulfilled, and they say that Binance is not to blame for it, and that the token price has crashed. It’s like talking to a brick wall. That is, the level of support is amazing. I don’t know who works at the Support Center and copies and pastes canned responses — maybe they’re Indians, Ukrainians, Madagascans, Martians or people from the moon?

4) Even in the most recent ticket, in which they claim to have got it all, they say the following:

After checking these two tickets, both of your friends accepted our offer and promised to abandon the issue
That is, they could not even understand that two tickets (No. 3026940 and No. 3179978) refer to the same person (me, Ramil), and not two different people. Mind you, the tickets were created using the email address and the same account. It seems to me that no one has even opened these tickets. That’s crazy.

5) After long (almost a week's correspondence, judging by the dates in the ticket), they finally got what they wanted to know, namely:

After checking these two tickets, both of your friends accepted our offer and promised to abandon the issue. However, they broke their promise and asked for additional compensation. If possible, you can check all the connection on these two tickets. We have not given them more compensation and are not going to give them more compensation.
I believe that this short message is a Lie to third parties in relation to my publicly stated position and history of cooperation with Binance. I did not ask for additional compensation. I created a ticket, where the Support Center itself referred me to legal advisor Anatoly Rybachok, who offered my representative 1000 USDT instead of my loss of 1400 USDT (that is, not full compensation). With the consent of all parties, the NDA Agreement was concluded, which no one complied with after that. The whole story is described in the article Scam With a Signed NDA Agreement: Violation by Binance Lawyers and Binance Exchange Itself (No Money was Transferred). But as you can see, in correspondence with other users... the story is described in a completely different way. And from the singular, I've already turned into the plural — which means that there are many such cases, although this is an obvious fact based on the history of scam using BULL/BEAR tokens.

6) 6) After this level of communication, the person whom I asked to clear things up with the implementation of the NDA Agreement withdrew the deposit from Binance and completed cooperation with the exchange. What is correct and fully consistent with the goals and objectives of ScamBinance.Com.

Formally, for an ordinary user, there is no full-fledged communication channel or feedback with Binance. The Support Center does not provide proper communication. Certainly, they can help in some superficial questions or tasks (you can get the same help from the FAQ section), but if the question is non-standard, or a problem/claim arises, there is no high-quality, professional support — and there won’t be, ever.

And if there is no connection, or it is only at the Support Center level, you won’t be able to solve a more or less serious issue. Since there are no other methods of communication with Binance, such as fax, phone, email (they don’t reply to emails, including legal ones), office (which you can visit yourself or send a question), mailing address for correspondence — there is no feedback. No one will solve your problems, claims, and pre-trial issues. No one needs this.

The biggest cryptocurrency exchange Binance is an underground, completely illegal, scamulent structure that tries to provide financial services (including banking — Forex) of an extremely low technical level. A scamulent structure that hides any legal and factual data about itself and its beneficiaries. It will steal your deposit on every occasion. It does not play the role of an intermediary, but plays in its own field against each of its users — and there are absolutely no rules. Binance is not responsible for the services provided and for the safety of your funds — it is important that we understand and internalize this.шаблоны для dle 11.2
20.07 13:26