Here is the communication of my representative with lawyer Anatoly Rybach on behalf of Binance (LLC Yuskutum Consulting, LLC Yuskutum Kiev, Ukraine). This lawyer was presented by Gleb Kostarev in a chat room for traders, where people gathered to share their plans and attempts to return funds from the Binance exchange as part of a conflict with the malfunctioning of BULL/BEAR tokens from FTX. Here are presented general thoughts on this correspondence, the full story is available on the link Scam with an agreement signed by the NDA: Violations by Binance lawyers and the Binance Exchange itself (money was not transferred). 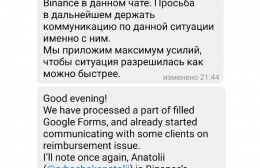 All correspondence in screenshots and text is published below. For my part, I would like to point out some things, I refer to some points of the Agreement, you can check in the document by following this link - Scam with the NDA: Overview of the dubious NDA agreement (violated by Binance).


So, the following thoughts on the situation of negotiations of my representative with this lawyer:

The very fact that Binance offers its customers a low-quality product for work, and by compensating, tries to return (give) not the entire amount of loss, but only a part, instead of returning the full amount and offering compensation for the situation itself – we do not consider this, these are obvious things and a big drawback in the reputation of the so-called exchange. After stealing $1 from users and returning 50-80 cents from $1 to those who applied and tried to prove their case full of obvious mistakes, is not “admitting an error and apologizing”, this is financial scam and Binance’s attempt to delete articles with a description, shift the blame on FTX (with whom they have excellent relations) – only exacerbates the situation, financial scam with attempts to forgery and concealment of facts.
- The total loss due to improper (contrary to the declared characteristics of the instrument) operation of the financial instrument (BULL / BEAR tokens) is 2600 USDT (approximate number).

- Binance transferred my loss to the Lawyers (and information that part of the loss was compensated, to be exact 1200 USDT), that is, Binance offered an additional round of negotiations to compensate for losses and resolve the conflict (indirectly, this is confirmed by correspondence in the Binance Help Center).

- The lawyer agreed on an additional loss compensation in the amount of 1000 USDT, in total two compensations did not cover the total amount of damage (2600 - 1200 - 1000, the difference is 400 USDT and also the moral damage), but I gave the go-ahead to the representative to agree (so as not to lose time, as was advised by lawyer Anatoly.

- The lawyer sent the NDA Agreement, it was signed by me and all the necessary personal data was filled out.

- Lawyer Anatoly, considered the entered data in the NDA Agreements invalid (and the documents sent by my representative, namely the cover page of the passport, and the registration page).

- Such suspicions, taking into account the online conclusion of the transaction, is generally normal, given that my name is different from the name of the representative as seen in the correspondence and the Agreement (clause 4.7 in some way gives Binance the right to request additional documents from me).

- Further, the lawyer Anatoly for some reason decided that 2 people use the account, although in the dialogue my representative clearly gave an answer. That there is only one owner of the account – Ramil, who already received part of the compensation and was sent to talk with a lawyer to resolve the issue of the remaining amount.

- Lawyer Anatoly proposed to settle the issue of compensation directly with Igor (my representative), although he is not the owner of the account, is not a party that has signed the NDA and this NDA has already entered into force from the moment of its signing (paragraph 4.1).

- It seems to me that a completely fair answer was given that the representative (Igor) is not related to the account on Binance, in the full name column (during verification) it is empty. And he made it clear that, if necessary, the owner (Ramil - I) can provide any documents necessary for the situation, or as an option, the account will be verified on Binance, and the NDA Agreement can be supplemented with input data such as phone number, account ID, email. Since this NDA Agreement is extremely low in quality and it is unclear how lawyers generally composed it.

- Alas, my representative and lawyer Anatoly failed to come to a common denominator. Despite my desire, I (as the person who has signed under the Agreement) was not asked neither additional documents, nor asked to pass account verification (if they had doubts about violating certain rules), nor asked to me to contact them or other actions that could lead to a positive result.

- The result of the correspondence is not surprising, despite the fact that compensation has already been credited to my account in the amount of 1200 USDT and there was no doubt whose account there was after signing the NDA Agreement (clause 1.2.2.) The amount of 1000 USDT was not accrued for a completely fictitious pretext, and for my part, I consider this action an incompetence of lawyers and banal Binance scam. For one reason, if Binance had doubts as to who the account owner was, I could go through full verification or I could be required to go through the KYC procedure.

- It is also interesting that the compensation in 1200 USDT was previously accrued without any Agreements and conditions, the subsequent compensation already came with the terms and conditions, the Agreement and despite the fact that there is only one account in both cases, the money was not credited to it. When refunding the account balance, which surprisingly did not ask to sign the NDA Agreement and did not ask for verification, but when it came time to return what Binance had earned dishonestly, conditions appeared that I was ready to fulfill, but alas.

- Funds in the amount of 1000 USDT under the NDA were not credited to the account. According to the Binance Support Center, they have already returned everything they owe, and they don’t consider the NDA at all, as if it does not exist.

- Clause 4.1 states that the NDA comes into force from the moment of signing and must be implemented – this did not happen.

- Clause 4.2 states that the NDA cannot be terminated unilaterally (let's say the Binance exchange is optional), but in my case, the Binance exchange not only failed to fulfill the terms of the Agreement, but doesn’t see it point-blank after Anatoly Rybachok (lawyer) allegedly no longer cooperates with Binance.

Below is brought a full correspondence with the lawyer Anatoly by a representative, for which special thanks to him: 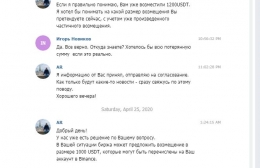 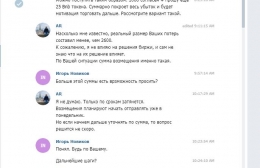 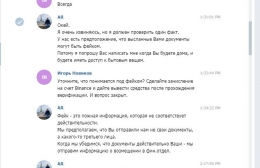 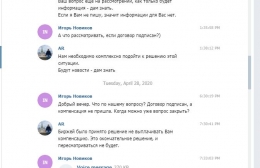 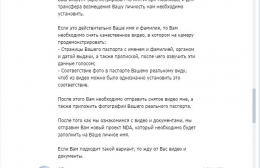 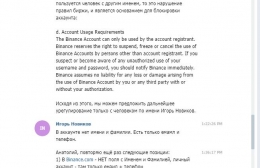 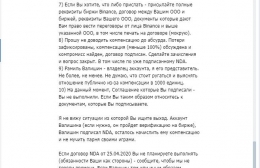 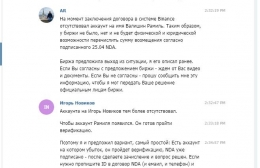 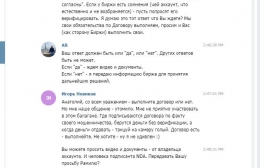 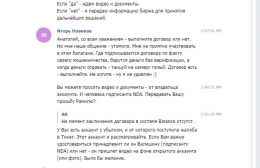