Correspondence with Binance Support Center is published. We have already published Communication with Lawyer Anatoly Rybachok (Yuskutum Consulting LLC, Yuskutum Kiev LLC, Ukraine). The situation is connected with the incorrect work of BULL/BEAR Tokens by FTX. Here we talk solely about the correspondence; the full story is available here — Scam with Signed NDA Agreement: Violated by Binance Lawyers and Binance Exchange (Money not Transferred). You can also read the Review of Questionable NDA Agreement — which was concluded by Binance, but, as the correspondence shows (published below), it was never fulfilled — and the Exchange does not even pay attention to this NDA Agreement, as if it doesn’t exist.


I’d like to immediately clarify the correspondence, which — as the readers have already noticed — I always do:

After my representative communicated with lawyer Anatoly Rybachok, which went nowhere, or maybe Binance run out of money to give those whom they had deceived, I decided to take matters into my own hands (fortunately the NDA agreement was already signed, and it seemed to me that in a civilized society this was a document binding on all parties — mind you, the Agreement was signed on April 25, 2020, a month ago) and contacted the Binance Support Center with a request to fulfill the NDA Agreement and credit the agreed compensation in the amount of 1000 USDT to the account balance.


It was quite an amusing communication:

- First, the Binance Support Center said that lawyers would contact me and discuss options. Although, in the first message, I already indicated that the Agreement with the NDA had been concluded and all that remained was to credit the funds. But since, as they said, ‘You are not satisfied with our offer,’ you should talk to lawyers.

- I reiterated the above information, but the Binance Support Center refused to do anything and directed me to lawyers (with whom I had already communicated). That is, it was no longer their problem, but a legal one. I repeated that the NDA agreement had already been signed and came into force from the moment of signing, but nobody cared about it. I uploaded the NDA Agreement to the ticket system (see screenshots), but no one even viewed it.

- I made a second or third attempt to explain the situation — that my representative had already communicated with the lawyer and I had signed the NDA Agreement (here it is, already uploaded). They only had to pay me 1000 USDT, which I never saw; all I asked them to do was to transfer the funds — and that was it, I had no other claims. I already had a general notion of “where I was, and how things worked around here.” An employee of the Support Center suddenly remembered that I had already received compensation in the amount of 1200 USDT and that the lawyer should deal with the issue — it was a real progress after a week of communication — and told me to contact the lawyer. ‘Do the lawyers have to accrue the compensation or is it Binance that does?’ I wondered.

- I could not contact Yuskutum Consulting LLC. I sent a message to lawyer Anatoly Rybachok and Yuskutum LLC — and got no response (see screenshots). I notified Binance about it. This was where the fun began. It turned out that Binance did no longer work with the lawyers in question (Yuskutum Consulting LLC, Yuskutum LLC (Kiev, Ukraine)) and they themselves began to address the issue of compensation. It turned out that the compensation that had already been given before the signing of the NDA Agreement (until the communication of my representative with Binance lawyers) was due to me.

- Please note that in the correspondence with Anatoly Rybachok there was an attempt to avoid paying the money — allegedly, it was not clear whose account it was and other nonsense. In the correspondence with the Binance Support Center, there was no longer question about the account — it was already clear, as they had already accrued 1200 USDT’s compensation to this account компенсации, they chose a different tactic here. “You were paid 46% (total damage from the Binance stock exchange scam is 2600 USDT) of the money stolen from you, we don't owe you anything else. You have the NDA Agreement and we owe you 1000 USDT — we don't know anything, we don't remember the lawyers, and we don't talk about it.


Handsomely? Nice, if not so sad. 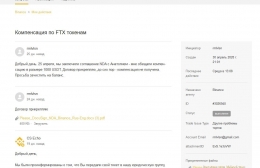 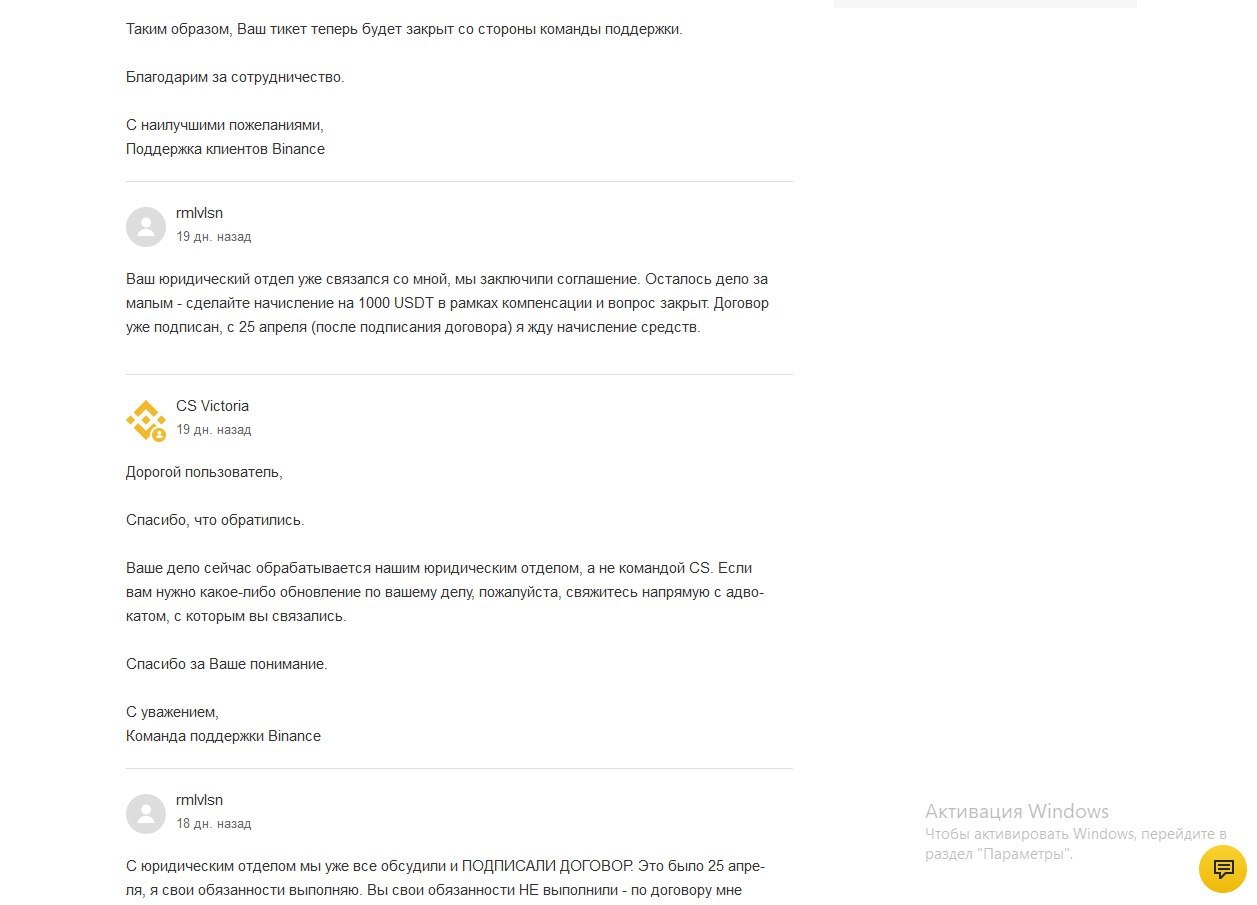 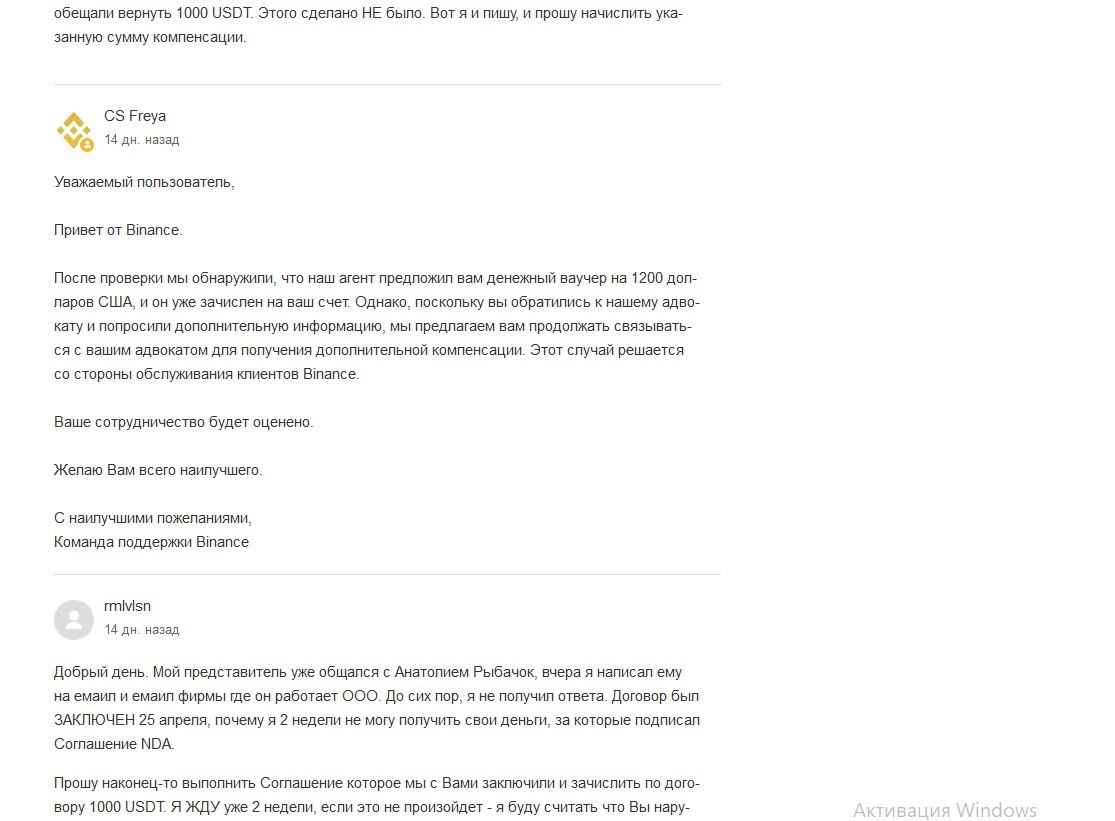 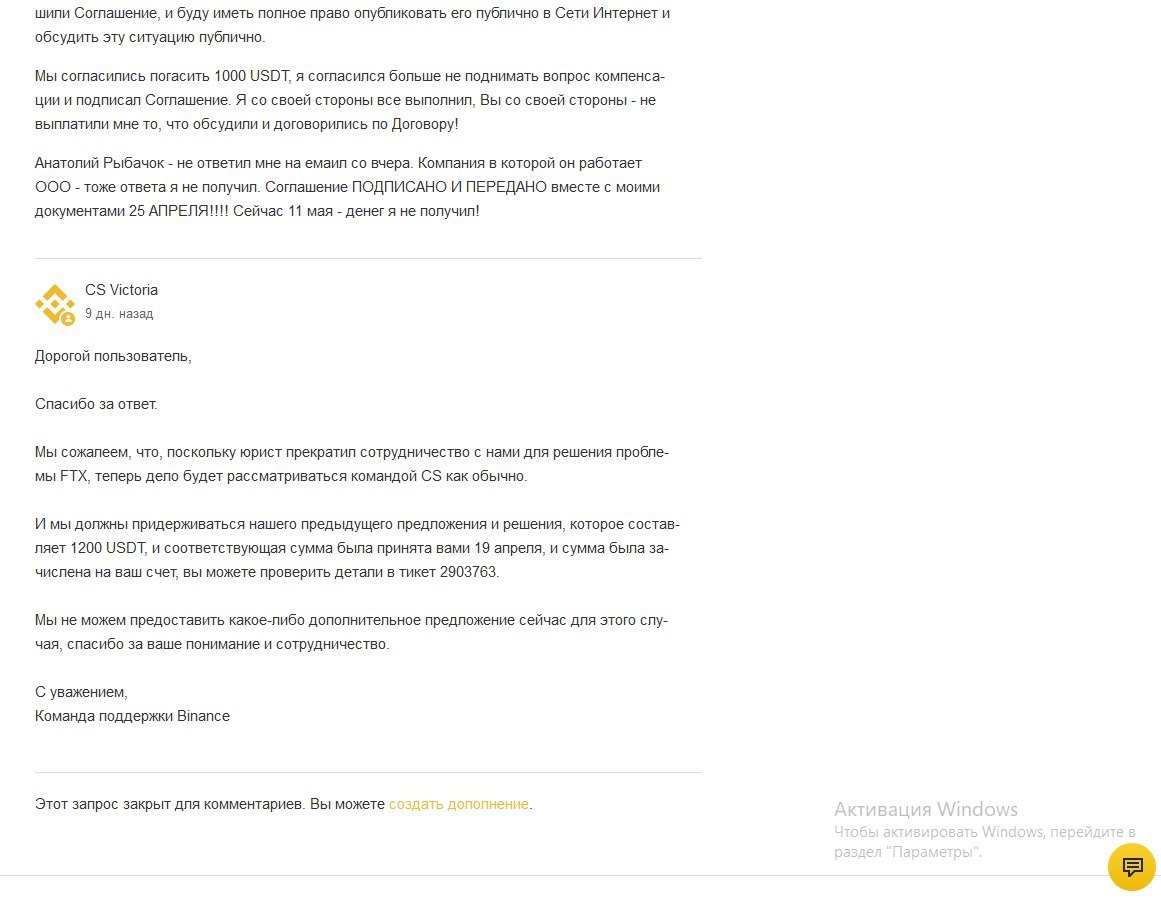 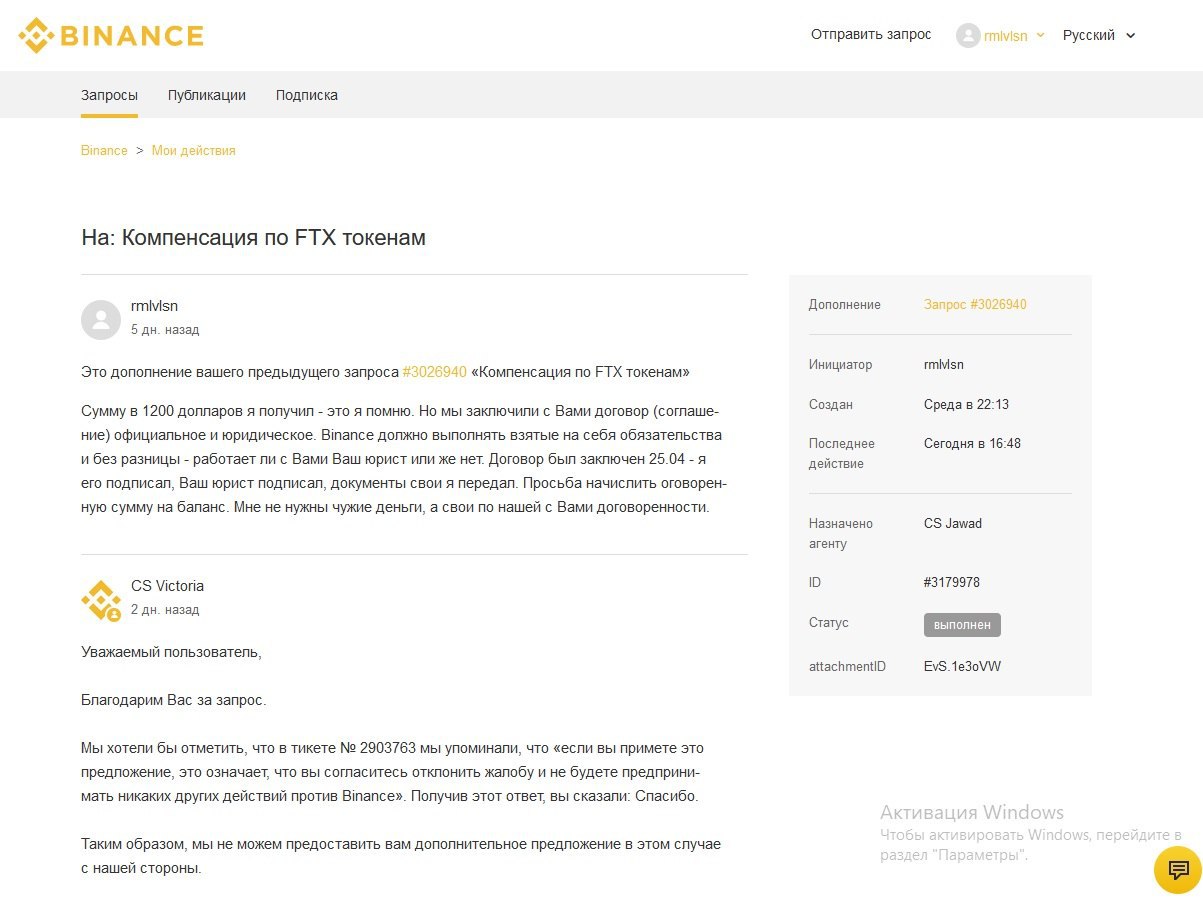 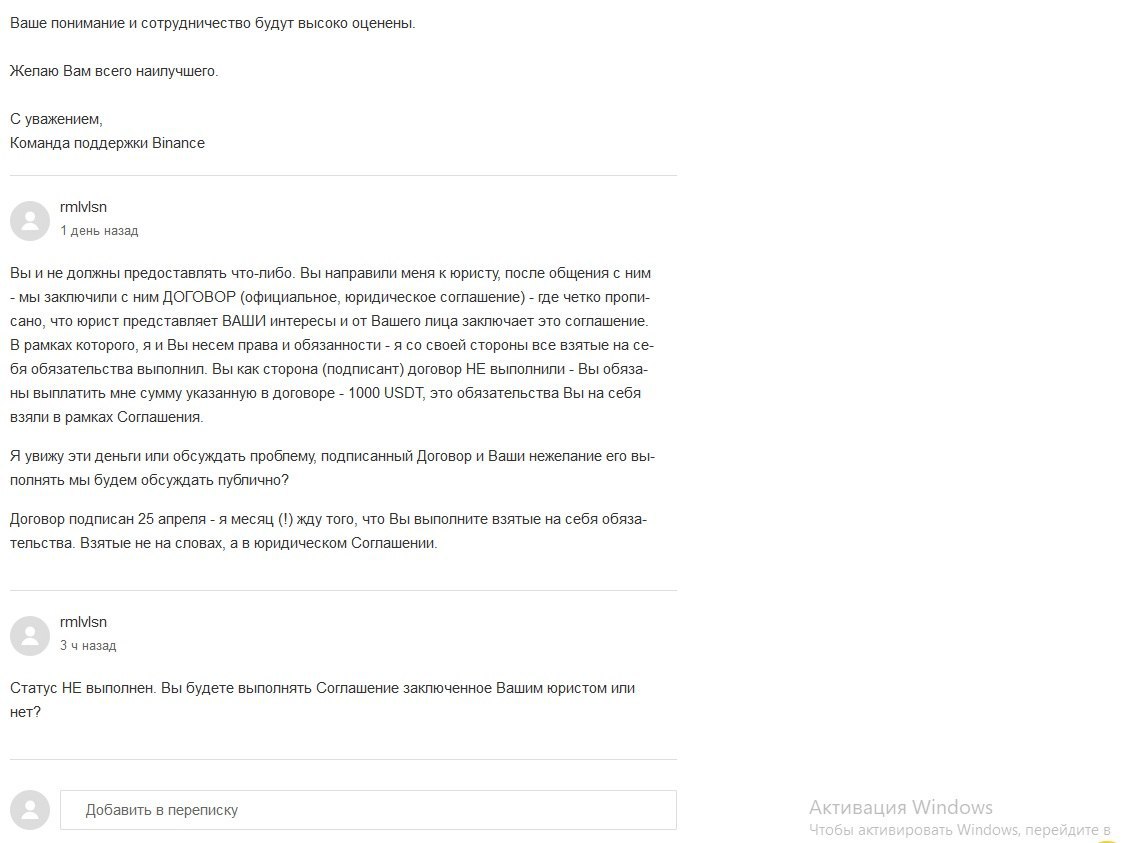