At the end of March, the Binance Bitcoin Exchange delisted the FTX credit tokens from the listing. Then Changpeng CZ Zhao emphasized that users do not understand these tools, so Binance has to protect them. On May 12, she added similar tokens under her brand to the listing. 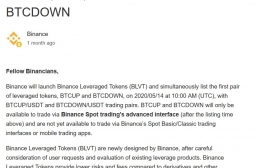 Shortly before delisting, Binance's client group lost over $1 million on credit token liquidations. Users believe the problem was on the site side. ForkLog has figured out what credit tokens are, what happened at Binance and why the exchange eventually changed its position.


«We’re sorry to hear about your loss»


The FTX derivatives exchange is operated by FTX Trading LTD, a company registered in Antigua and Barbuda (an offshore zone where online gambling is allowed). Its founder is former Jane Street Capital trader Sam Bankman-Fried. In 2017, he founded the Alameda Research cryptocurrency firm, currently managing a portfolio of digital assets worth of more than $100 million. FTX also has an American subsidiary, but credit tokens are not represented there.

Credit tokens BULL, BEAR, ETHBULL and ETHBEAR from FTX appeared in the Binance listing in January 2020. They allowed you to earn triple X's on the increase or decrease of Bitcoin and Ethereum rates. For example, for every 1% increase/decrease in BTC, the BULL/BEAR rate grew by 3%. Later, similar tokens for EOS and XRP were added. However, on March 12 at about 3 pm on MSC tokens ceased to correlate with BTC, ETH, EOS and XRP in the proportion of x3 and fell in price from 30% to 65%, which led to the elimination of positions of some clients. They told ForkLog that with EOSBEAR rising from $32 to $177 (5.5 times), EOSBULL fell 46 times from $72 to $1.57. At the same time, the price of the underlying asset EOS has changed only 2.4 times - from $3.60 to $1.50. Similar messages can be found on Twitter. 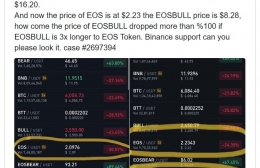 BULL/USDT dropped more than 40% when the underlying BTC asset changed by only a couple оf percent. ETHBULL decreased by more than 65% when the price of ETH changed by 9%. XRPBULL lost more than 31% when the price of XRP fell by less than 2%. The affected users have created a Telegram Chat, where they discuss ways to solve the problem and the possibility of obtaining compensation. At the time of publication, it has 96 users. The owner of Telegram Chat estimates that at least 200 users have lost more than $1 million.

«In most cases, many have lost an average of $ 5000-6000. I lost about $ 30,000. There are people whose damage amounted to $ 86 thousand, $ 100 thousand», he said in a comment to ForkLog.
After the users’ complaints, Binance posted warning messages for each pair of the FTX, emphasizing the dangers of trading in these markets. Also, from the platform of the site disappeared the mention of a clear follow-up to the FTX tokens about the price of the underlying asset in the ratio of x3. Users were able to screen a copy of the listing message in the Internet archive, but at the moment this snapchat is not available. If we compare the text in the image and the current version of the ad, then the last one is missing a paragraph on price movement in a strict ratio of x3. 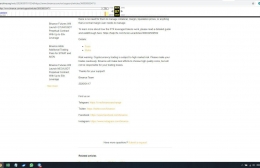 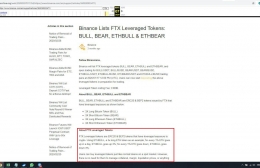 The representative of the support service in response to the appeal of one of the victims stated that the price of credit tokens depends on the «trade behavior of all users» and not on the movement of the price of the base asset as was stated in the beginning. 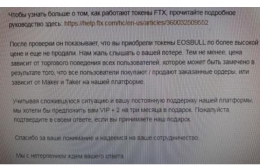 We’re sorry to hear about your loss. However, the price depends on the trade behavior of all users, which can be seen as a result of them buying/selling ordered warrants, or depends on the Maker and Taker on our platform."
On March 28, two weeks after the incident, Binance delisted all FTX tokens. Changpeng Zhao explained the decision by the fact that users do not understand the principle of operation of the asset. 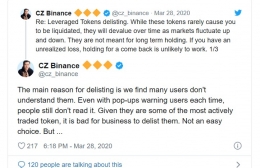 “We found that many users do not understand the specifics of these tokens and do not pay attention to the warning pop-ups. FTX tokens are among the most actively traded, but user protection comes first. " 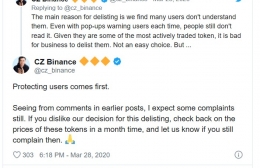 CZ added that although these tokens "rarely lead to elimination, they depreciate over time and therefore not intended for long-term storage."

In response to a request from the victims, FTX technical support reported that credit tokens do not work as static leverage x3 and sometimes their price ceases to correlate with the price of the underlying asset. FTX noted that they have known about the problem since 2019.


On May 12, Binance announced the launch of its own credit tokens BTCUP and BTCDOWN. These tools are not available on the American Binance US platform. 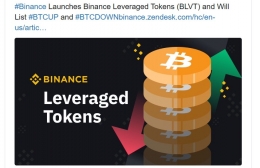 «Binance Leveraged Tokens (BLVT) was developed after careful consideration of user requests and evaluation of existing credit products. They provide lower risks and fees compared to other tokens with leverage».

Larry Сermak an analyst of the block cryptocurrency publication paid his attention to the new tokens: 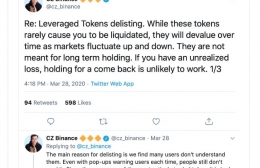 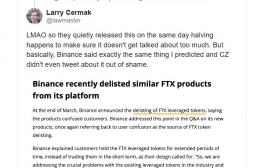 «The tokens were quietly released on halving day to avoid unnecessary talk, and CZ was ashamed to even tweet about it», - Cermak said.
According to Binance, BTCUP and BTCDOWN tokens do not support fixed leverage, and are adjusted for changes in the nominal value of positions of perpetual contracts in the range of values between x1.5 and x3. This property of the asset allegedly allows you to " reduce the impact of a sideways trend and does not allow its price to exceed market fluctuations."

«The target size of the leverage is constantly changing and hidden from outside scrutiny», the company said in a press release.
On the day of the launch of Binance credit tokens, FTX representatives condemned the opaque mechanisms of the exchange: 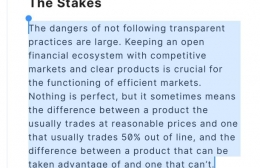 «Retention open financial ecosystem with competitive markets and transparent products is critical to their effectiveness. Nothing is perfect, but sometimes it means the difference between a product that is sold at a reasonable price and a product with an unreasonable value, or the difference between a product that you can use to your advantage and the one that can't».
This view was supported by the famous researcher Su Zhu: «Binance's recently launched LTs have loosely defined rebalance rules. I too agree this can be a recipe for disaster. Nobody will be able to MM / arb these except Binance themselves, and there will be no way to define a proper vs improper rebalance event», - Zhu pointed out.
Administrator Whalepool.io conducted a comparative analysis of Binance and FTX credit tokens. He noted that every time the base Fund is rebalanced, the position is charged a financing fee, which reduces the net asset value (NAV) for its holder. 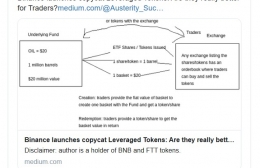 The expert added that due to the opaque rebalancing methodology it is impossible to verify the correct tracking of the net value of the asset, which makes it difficult for traders.

"The worst thing about Binance credit tokens is that you just depend on the algorithm. You can't check whether Binance charges hidden fees – you just have to trust the algorithm.
Binance is the sole issuer of BLVT, which begs the question: are low management fees related to what the exchange earns from marketing and the opacity of the rebalancing?"

“The FTX exchange has agreed to pay a certain the amount to Binance users who were holders or traded BULL / BEAR tokens that day. In accordance with this decision, within 14 days, Binance credited BUSD tokens to the accounts of users in the amount equivalent to the value of credit tokens in the accounts at the time of delisting”, - reported in Binance.
They also added that they had repeatedly warned customers about the high risk of transactions with credit tokens.

“We always inform users about the need for careful transactions. However, users must understand the risks and be responsible for their losses resulting from their trading strategy and changes in the market price of the underlying asset.”

The owner of a Telegram chat for affected traders told ForkLog that users received an offer from Binance for compensation in the amount of 10%-30% of losses and providing VIP access to the exchange's services for one or two months. Binance later sent a representative to the casualties to resolve the problems. Customers were asked to fill out a form with ticket details, loss amount, email address and nickname in Telegram. According to the forklog source, they were promised a 100% refund.

«On the part of Binance, it has been stipulated that we must sign a non-disclosure agreement (NDA) after accepting the amount of compensation. Many of the participants were silent, many of them asked for their ticket number to be removed from our list - we understood that they had signed the NDA».
Gleb Kostarev, Binance's representative in Russia, confirmed to ForkLog the existence of NDA agreements:

«Yes, users were asked to sign the NDA to confirm their acceptance of the settlement and the amount of compensation».
Later, the owner of the Telegram chat found out that many of the subscribers were not paid. As explained by Gleb Kostarev, this situation could occur for users who violated the terms of use of Binance:

«Yes [the user who signed the NDA did not receive compensation], if during verification it was found that the user violated our rules of use, for example, registered an account not for themselves, but for a third party», he explained in The ForkLog comment.
The user initially received a letter from a representative of the exchange offering to compensate him 5000 USDT, but later this amount was reduced by 10 times – to 545 USDT. The total damage to the user from the constant rebalancing of credit tokens, according to him, amounted to about $30 thousand. 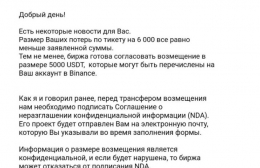 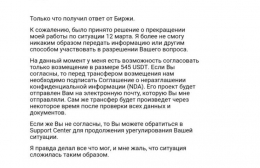 At the moment, the client has received no compensation:

«There are and have been many cases in the group: people first accepted such an interim gift, and then they were sent. I received nothing: if I accept, I will lose the right to claim the entire amount».
шаблоны для dle 11.2
14.09 16:48