It is sad to see how the fraudulent casino Binance continues its criminal activity and has absolutely no plans to change the "schemes" of doing business. Blocking of accounts for reasons or for no reason at all, technical support that does not work and does not solve any problems of users, theft of assets on users' balances ... even such countries as the USA, and on Binance.US - all this has been practiced for a long time and is gaining momentum every year.

When Binance.com commits fraud - that's understandable, because it's not for nothing that Binance hides the legal structure from regulators and users and hides the legal structure from regulators and users. But when, Binance.US - cheats users, blocks them, does not respond to inquiries and does not return personal assets - it is beyond good and evil. Binance has a lot of problems lately - China: Binance Exchange continues to conduct its illegal activities in China and Archive 2017: Chinese regulator about 60 ICOs: Investigation on illegal offering and sale of securities Binance - casino can't get enough of securities, took up tokenized shares and immediately ran into "EU regulators" - European regulators will check the legality of Binance tokenized shares offering.

In the U.S., Binance has long been under the spotlight and the offshore casino will get "a slap on the wrist". Let's remind, the CFTC has started an investigation concerning Binance because of possible sale of derivatives to the Americans, after this news Binance for appearance began to block users from the USA, but all this only for appearance, in fact through the Program Binance Broker continues to work with citizens of the USA: How Binance through Cryptorg serves the citizens of the USA.

At one time Forbes well highlighted the true plans and the identity of the casino Binance in the article Binance profits from the U.S. investors cheating regulators (Operation Tai Chi), the legal department of the casino was decided to take legal action, but ... refused to sue Forbes (Operation Tai Chi)- too revealing could be a trial and bring out all the dirty laundry of this criminal casino exchange. Coinbase is extremely negative to "fellow casinos" - because it is well aware of how this criminal structure lives - CoinBase complains against Binance because of the severity of legal compliance and Coinbase refused to be in the Association of American Cryptocompanies along with Binance.US.


Some users have considered protesting outside of Binance's San Francisco headquarters in an effort to regain access to their funds.

Key Takeaways:
- Binance users have banded together to try and get their accounts unlocked, many of which have been frozen since last year.
- Many users have had tens of thousands of dollars locked in frozen accounts with little to no recourse from the support system.
- Customer experiences include dead-end conversations with automated bots and a blunt Reddit moderator who is the focus of dozens of complaints.

A group of concerned Binance users has contacted Crypto Briefing with a document containing dozens of unresolved support tickets, a closed loop of customer service bots to navigate, and hundreds of thousands of dollars in user funds locked on the exchange.

#BinanceHell Hashtag Trends Among Users: One Redditor caught trapped in “Binance Hell,” Cryp-to-Bountiful, told Crypto Briefing that they have $45,000 in locked funds and no resolution in sight.

“I understand that U.S. citizens are not allowed to trade on Binance.com. However, I am not allowed to transfer my assets out. I can’t even see my account. There is no option for U.S. citizens to set up [two-factor authentication]. No working chat. No phones..
Another Reddit user, Ambitious_Resident74, claims to have $300,000 in locked funds, with the only communication from Binance citing “withdrawals suspended due to risk management.”

“Same issue as others, mine was a $350 chargeback. I sent the video of myself proving I have control of the account and I’m fully verified on there,” said u/Ambitious_Resident74, adding that they could deposit funds but not withdraw. “This is criminal and has set me back in life severely..
Other users have confirmed that they are experiencing issues with two-factor authentication (2FA) or that their attempts to reset 2FA have gone on for months. In some cases, the issues persist long after 2FA security measures have been reset entirely.

Even the on-site “send” button allowing users to transfer funds is reportedly grayed out and disabled.

“I had a chargeback due to a bank error,” complains one user. “Always been in good standing. Wired the money to Binance right away and they posted it to my account. Since then, they disabled all trading and withdrawing from my account. There is no phone number, just support tickets.”
It’s an open secret that U.S. customers have used VPNs to get around restrictions prohibiting them from using the main Binance website. This, according to at least one Binance employee, is likely the common point between all users. In a Reddit thread, a moderator and Binance representative symbiotic_bnb insisted that Binance U.S. users can still withdraw funds unless they’ve done “something stupid, like use a VPN to bypass restrictions.”.

The CFTC is investigating Binance to see if the exchange has been facilitating illegal transactions, and this investigation may also play a role in the current situation with Binance customers. 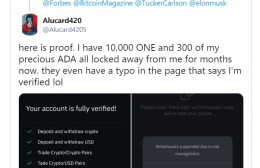 Threads on Reddit also complain of the moderator who is often seen insulting or mocking users in support threads. symbiotic_bnb has accused users that have been petitioning for help of being malicious actors and “whining” about the loss of access to their funds, stating that Binance staff are not “incompetent morons.” 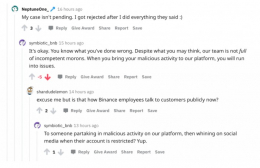 With a serious backlog of unresolved cases and frustrating experiences dealing with support, users were forced to begin organizing as a group. For some, the issue has been ongoing since last year. Another user stated that customer service had asked them to perform tasks that the website didn’t support.

“Customer support is also asking me to do impossible things which the binance website doesn’t support, such as uploading pdf files in the chat function, when the chat does not support such files. I was also asked to make a bank transfer appeal by customer support, I did this and I got an email response saying the appeal was rejected due to ‘risk control.'”
Their experience with customer support included blank messages from Binance’s chatbot and an appeal system that directed them to open a ticket with customer service, leaving them with $40,000 in trapped funds for over two months. 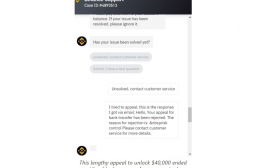 It’s worth noting that many of the cases listed in Crypto Briefing’s documents deal with users from outside the U.S., such as from Finland and Australia. In fact, a user named Alice, one of the organizers behind the effort to unlock user accounts, told Crypto Briefing that the situation was even worse for international users.

“Seems the U.S. customers are doing better as they can report to official agencies, unlike the rest of us using .com,” the organizer said, adding that “Customer service ‘agents’ are likely 80% bots. My personal experience has been horrendous, but it is nothing comparing to some who have been stuck since December.” 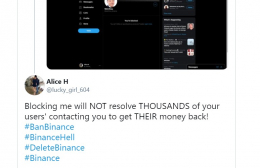 Binance users have even discussed an in-person protest to have their accounts unlocked, with frustration mounting as the situation continues to unfold. In an initial email to Binance.com regarding the locked accounts, Crypto Briefing was told to speak with the communications team at Binance.US. This team has yet to respond at time of press.шаблоны для dle 11.2
03.05 10:26